Robyn’s story: “There are more causes of liver disease than just alcohol misuse”

My name is Robyn and I was diagnosed with Autoimmune Hepatitis in April 2021. By the beginning of June, I had already received my transplant. My story happens over a short time period but I hope by sharing it, it might help someone else.

I did not have many symptoms of my liver disease. In August 2020, I experienced swelling around my ankles (known as oedema), but this was during a heatwave whilst I was living in a very hot attic flat, so I put it down to heat. This was during the first COVID lockdown so even if I had wanted to go to a GP, I couldn't.

By February 2021, I was starting to feel more fatigued, so I went to my GP for a blood test in March. At 4am the following day, I was told to go to A&E as my platelet count was extremely low. I did this, and further tests that day showed that my liver function wasn't great. I found this incredibly ironic, considering that I have never touched alcohol in my life - in fact, I only drink water!

On admission, I was also told that I was jaundiced. No one around me had noticed this because my skin is a natural tan colour, so it was only visible if you looked closely in my eyes (which people don't really tend to do!) What followed was a series of tests which showed that I had liver cirrhosis, portal hypertension and splenomegaly (which explained the low platelets). It was only after a liver biopsy and a three-week wait, that I was diagnosed with Chronic Autoimmune Hepatitis at the beginning of April.

It was explained to me that my liver was not in a good way at the time of my diagnosis and that I would be referred to a transplant centre. I started prednisolone but only four days later, I experienced my first episode of Hepatic Encephalopathy. I went on to have three acute episodes of HE throughout May, all of which resulted in total amnesia - my last memory would be going to bed, my next would be waking up in hospital a few days later with no idea how I got there. HE remains to be one of the most terrifying things I have ever experienced. I have seen videos of myself and it's like watching myself being possessed by someone I don't know.

According to the people around me, I was incapable of doing anything for myself; I didn't know who or where I was most of the time and my mood would switch from being giggly, to being terrified and tearful. Those around me were aware of HE, but did not know that it could present itself so suddenly and so severely, and the first time I was taken to A&E with HE, it was dismissed as anxiety. HE is something which I still feel needs a lot more awareness, and I feel it’s imperative that anyone with a liver disease is aware of its existence.

I was assessed for a liver transplant at the end of May after my third HE episode. I had also been started on tacrolimus just prior to this episode, which resulted with an acute kidney injury caused by tacrolimus toxicity, as it turned out that my liver was unable to metabolise the drug. This also played a role in why I was assessed at this stage. I was placed on the transplant waiting list on a Wednesday in early June and received my liver five days later. I still don't fully understand why I was one of the lucky ones, and was able to receive my gift so quickly, but I remain forever grateful for my transplant team and my wonderful donor.

Because I am only a small human being (I am 4 foot 11 inches tall), my new liver was slightly too big for me.

However, my story doesn't end here. Because I am only a small human being (I am 4 foot 11 inches tall), my new liver was slightly too big for me. My transplant team, therefore, did not close my muscle wall, and so I had what is known as a skin-only closure. This is something that I was not made aware of prior to my transplant - I did not know that it was something that could happen and, from sharing my story with others, it seems that this is the case with most people, which is why I want to share this. Because my muscle wall was left open, I essentially had a massive hernia right across my stomach (my scar is larger than most because I am so small). I had to wear an abdominal binder 24/7 in order to move and walk comfortably.

I was meant to have my muscle closure surgery in August 2021, but I ended up having an anaphylactic reaction to Tazocin on the operating table, which meant that the surgery had to be aborted. I had received Tazocin many times before, including my transplant, so this was very unexpected, but it is suspected that I became sensitised to the drug possibly during my transplant. The second attempt to close my muscle wall was in November 2021, and the surgery itself was successful, but I then suffered complications. I had tachycardia which required cardioversion (that shock you always see on medical programmes) and then I aspirated into my lungs, got aspiration pneumonia and then required ventilation for a week.

I am doing well now. Since coming out of hospital in December, I have slowly been gaining my mobility back. I no longer have to wear my abdominal binder, I have been able to return to work part time, and I am hoping to restart my Masters in Psychodynamic Counselling and Psychotherapy in September. I am immensely grateful to everyone who played a role in saving my life. I want people to know that there are more causes of liver disease than just alcohol misuse, and that even young people like myself can have a liver transplant. 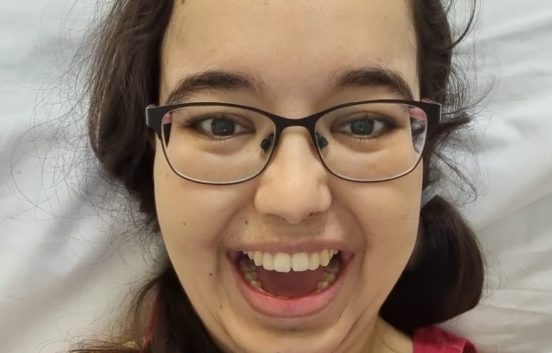