Jodie-Ann’s story: "My partner asked one of the midwives why I looked yellow." - British Liver Trust

Jodie-Ann’s story: “My partner asked one of the midwives why I looked yellow.”

Jodie-Ann experienced acute fatty liver of pregnancy when she was pregnant with her third child. She's shared her story with us to raise awareness of this rare form of liver disease. Thank you Jodie-Ann!

I count my lucky stars that my son arrived earlier than expected.

A few weeks before I went into labour I started feeling really unwell. I had pains in my tummy and shoulder, I felt sick every time I ate and I was really thirsty. I was drinking litres of water at a time -  nothing would quench my thirst but my urine was always dark.

When I’m ill I usually suffer in silence but this time I was in so much pain that I spoke to the midwives. They said it might be trapped wind and to try drinking mint tea. I took wind tablets but nothing eased the pain. Then the vomiting started too.

I’d planned to have a c-section but my waters broke early. I’d been feeling terrible all day with the pains in my side and shoulder. The pains were completely different to the contractions I’d felt with my previous two pregnancies. They were so close together and strong that my partner took me straight to hospital. Due to the pandemic, he had to wait outside in his van.

When I got to hospital a midwife examined me and said I was fully dilated so I couldn’t have a c-section. I learned later that if the operation had gone ahead, I probably would have died.

I got taken into the delivery suite and then started to push, my baby was struggling and his heartbeat kept dropping, a doctor came to help and I ended up having forceps delivery. My baby was perfect. 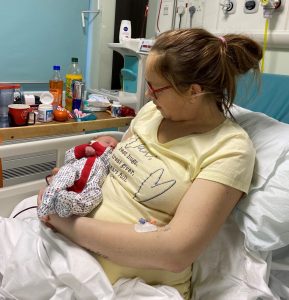 Unfortunately my placenta wouldn’t follow so I went into theatre to have it removed. In recovery, my temperature was really low. Back on the maternity ward, my partner asked one of the midwives why I looked yellow. She said it was just the lighting in the room but he said it wasn’t and he’d noticed it when I was in labour.

A doctor came and took some blood from me, then the sickness started again. It was awful. Not long afterwards some doctors came back and explained to me that I had acute fatty liver of pregnancy and it was a very rare disease. They said they weren’t sure how to treat it and they would have to get in touch with Leeds hospital.

My partner had to leave due to COVID restrictions so it was just me and our baby. A while later, midwifes explained to me that I needed to go to the acute medical ward and my baby had to go neonatal as he wasn’t allowed with me. It was so sad leaving him after only having him a few hours earlier.

On the acute medical ward I started to feel even worse. I was bleeding heavily, being sick and I was really weak. I passed out in the bathroom, I was woken up by people shouting me trying to bring me round. The next day I went for a scan and confirmed I had fatty liver. The liver condition was causing my blood not to clot so that’s why I was bleeding so much all the time.  Over the next few days I was given medication on a drip to try and clot my blood and 6 units of blood. I had another operation to remove something that was still in my uterus.

I was in hospital for a week afterwards before I was allowed to go home. Since then I’ve gradually started to feel better. I’ve been for blood tests every week at my GPs for months. My consultant says my liver is back to normal.

I didn’t realise how rare this condition was and that’s why I want to share my story. I count my lucky stars that my son arrived earlier than expected as I was told that if the c-section had gone ahead I would have died because my blood wasn’t clotting properly. This baby will be my last - I’ve been told I might get the condition again and it could kill me. 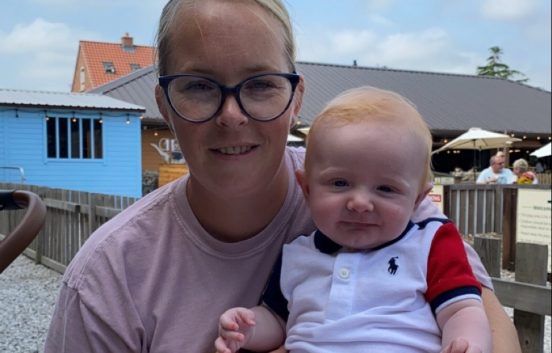