Liver transplantation is an option for patients with liver cancer if it is detected at an early stage and the patient is healthy enough to tolerate surgery.  The aim of the surgery is to remove the cancer completely. The surgery is only made possible by the generosity of donors who are willing to donate their organs.

In May 2018, Steve Dunster completed the London to Brighton 100K to raise vital funds and awareness of liver cancer having been diagnosed with liver cancer followed by a liver transplant in 2017.  Completing such an incredible challenge after his transplant less than two years before was no mean feat and to add to an incredible day, he was met at the finish line by the mother of his donor, Ben, who was just 18 years old when he died in December 2017.

Steve said: "When I met Karen it was a strange feeling, I thought it would be awkward but it wasn't, it just felt so natural. We possibly didn't have enough time together, and I hope to get to spend more time in the future, but I was running on adrenaline from just completing the challenge of the London to Brighton ultra challenge."

Karen said: "I am inspired by Steve’s story and by his determination to raise awareness surrounding his illness and organ donation, particularly considering the struggles he has faced. "

You can read Steve's story and Ben's story, written by Karen, on our website. 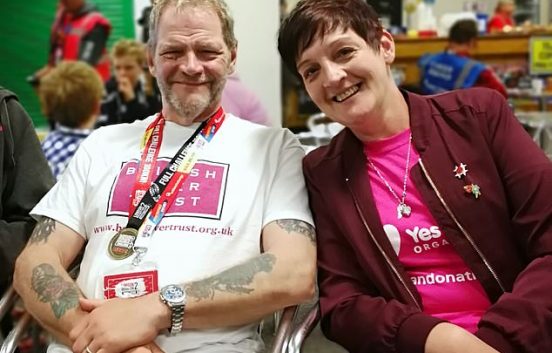