The All-Party Parliamentary Group on Liver Disease and Liver Cancer – a cross-party group of MPs and Peers – is calling for an urgent review of adult liver services to tackle rising deaths and disparities in care and outcomes across the UK.

Wayne David MP, Chair of the APPG, said: We’re in the grip of a liver disease epidemic in the UK with deaths from the disease increasing by an alarming 15% between 2019 and 2020.  A prompt and comprehensive review of adult liver services is needed now more than ever.”

Pamela Healy OBE, Chief Executive of the British Liver Trust, added: “We’re delighted to have cross-party support for an urgent review of how liver disease is detected and managed in the UK – a vital next step in tackling the postcode lottery in treatment outcomes and quality of care for liver disease patients across the UK.”

Liver disease deaths are four times higher in deprived areas, driven by alcohol harm, rising obesity and viral hepatitis. Among the worst affected regions are North East and North West of England where mortality rates are two to three times higher than the national average.

Professor Stephen Ryder (Nottingham University Hospitals NHS Trust) delivered oral evidence at the event on why the review is needed so urgently, adding: “Liver disease deaths have more than doubled in recent decades in contrast to other chronic conditions such as diabetes and heart disease which have remained stable or decreased. Yet liver disease patients continue to face huge variation and inequalities in care and outcomes across the UK.”

Thousands of men and women die unnecessarily without access to specialist care because liver services are consistently overlooked and under-resourced.  This is backed up by British Liver Trust research revealing that only one in four areas in the UK have an effective pathway for the early detection and management of liver disease.

Despite evidence of severe disparities in liver disease care and outcomes across the UK, liver health has been largely overlooked in the government’s levelling up agenda.

Steve, who is from one of the worst affected regions in England, spoke powerfully at the event about his own experience with alcohol-related liver disease, and  the lack of support and resources available to him when he was diagnosed , which left him feeling uncertain about what to expect from his care  when he was discharged from hospital.

“My story of waking up in hospital with end stage liver failure, which developed silently, is a wake-up call that alcohol-related liver disease can affect anyone. We need to have checks in place so people with risk factors are automatically picked up by their GP and don’t fall through the net.”

Adding: “Every liver disease patient should have access to the support and resources they need to manage their condition, not least access to a liver nurse specialist, patient information guides and signposting to peer support groups.”

Pamela Healy OBE closed the event with a call to action for MPs: “Together, we can turn the tide on the liver disease epidemic. I urge all MPs to join us in signing the cross-party letter to NHS Chief, Amanda Pritchard, calling for a comprehensive and timely review of adult liver services.” 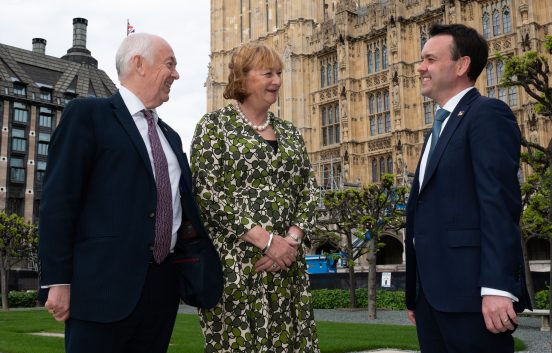