Sally’s story: “There’s a lack of awareness of liver disease compared to cancer.”

Sally has autoimmune hepatitis (AIH) and is also a Trustee at the British Liver Trust. Here she explains why she wants to raise awareness of liver disease through volunteering and fundraising for the charity. Thank you for everything you do, Sally!

I’ve discovered that running is great for my mental health.

"In December 2019 I was diagnosed with autoimmune hepatitis, a long-term condition where the immune system attacks the liver. I knew something wasn’t right as I had been experiencing wipe out fatigue and joint pain.

"I was working at the time as a police officer in London and I thought initially these were symptoms of working too hard and not sleeping enough. I couldn’t sleep off the pain and fatigue so I saw my GP, started a period of sick leave and had blood tests which showed I had a 'deranged' liver.

"Several hospital appointments later, I was diagnosed with autoimmune hepatitis and prescribed steroids to reduce inflammation of my liver. The steroids started to work immediately, albeit with side effects. I returned to work in January 2020 having had a liver biopsy to confirm the diagnosis.

"Six months later, after switching hospitals, I started taking additional medication in the form of an immunosuppressant. Although I was feeling much better, I couldn’t continue to do the job that I loved due to my energy levels, so I retired from the police in October 2020 after 31 years’ service.

"Two years previously I’d had treatment for breast cancer, which I fully recovered from, and I have been struck by the lack of awareness of liver disease compared to cancer – there’s simply no comparison! There’s a lack of funding for prevention and research and an unequal level of medical care and expertise depending on where you live.

"Both the Autoimmune Hepatitis Facebook Support Group and the British Liver Trust have been a good source of support, particularly during lockdown when I was trying to make sense of the shielding guidelines. Shortly after retiring from the police, I saw that the British Liver Trust were advertising for new voluntary Trustees. I applied and I’m now proud to be part of this excellent charity, working to improve liver health and reduce the impact of liver disease.

"For the past four years since recovering from cancer treatment, I have set myself an autumn fitness challenge to celebrate being alive. Previous challenges have been on my bicycle but this year I decided to run the Royal Parks Half Marathon to support the British Liver Trust. I’ve never run as far as 13.1 miles before and the training is taking me out of my comfort zone!

"It’s helping me to lose the weight I put on when the initial high dose of steroids caused me to lose control of my appetite and I’ve also discovered that running is great for my mental health. I feel lucky that my autoimmune hepatitis is stable now and well managed so that I can enjoy exercising. The Run 60 miles in September Challenge is just the motivation I need to train for the half marathon. 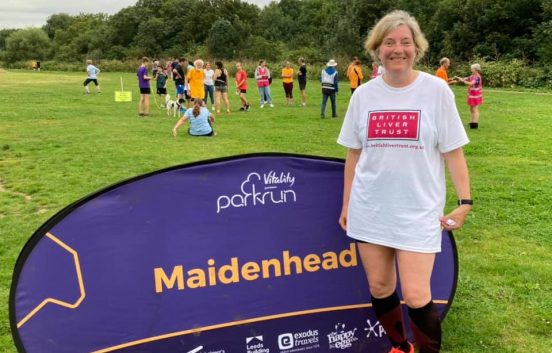