Jessica’s story: “Timely diagnosis of AFLP is difficult as the symptoms are so non-specific, and I didn’t even develop symptoms until the situation was advanced” - British Liver Trust

Jessica’s story: “Timely diagnosis of AFLP is difficult as the symptoms are so non-specific, and I didn’t even develop symptoms until the situation was advanced”

Jessica found out she had acute fatty liver of pregnancy (AFLP) shortly before her son was born, and needed an emergency caesarean section. She’s sharing her story to help raise awareness of this rare condition. Thank you Jessica!

Around a week before my baby was born I began experiencing nausea, acid reflux and a huge increase in thirst. I figured this was normal pregnancy stuff and nothing to worry about. A few days later the nausea progressed to vomiting and I went to Birmingham Women’s Hospital to get checked over. My skin and eyes had also started to turn yellow.

After some tests I was told my baby needed to be delivered immediately via emergency caesarean section (c-section). Not at all what I was expecting. I was 34 weeks along and still had stuff to sort out. As the c-section was under general anaesthetic my partner couldn’t be present so we said our goodbyes and off I went.

I woke up 3 days later in the ICU next door at the Queen Elizabeth Hospital to photos of my newborn hanging in front of me. I had a touch of delirium and didn’t fully grasp the situation. I was adamant a swim in the (non-existent) swimming pool was crucial to my recovery, and I was also keen to get on with work emails. I’m glad I wasn’t able to access them!

I came to learn I had a rare life-threatening condition called acute fatty liver of pregnancy (AFLP). The cure is delivery of the baby. It’s a bit of a misnomer as it isn’t just the liver which is affected. In addition to having liver failure, I had a degree of kidney failure and low platelets. The platelet issue meant my blood wasn’t clotting properly; this led to a severe abdominal haemorrhage after the c-section requiring further surgery and blood transfusions.

My situation was as bad as it could get, but I had the easy experience as I was out of it the entire time! My poor partner was told at one point the limits of what could be done for me had been reached. My mum faced the prospect of losing her daughter, and just a few months after losing her husband (my dad) unexpectedly.

Thanks to the incredible work of everyone who cared for me I pulled through. A surgeon asked if I remembered hearing ‘Never Gonna Give You Up’ - the song had started playing nearby while I was being worked on. Expert “Rickrolling” from the universe.

My body was unrecognisable, having ballooned up with kilos of fluid. Fluid on my lungs meant I needed CPAP (continuous positive airway pressure) and oxygen support. A line of staples ran the length of my abdomen. I had high blood pressure and blurry vision. Just rolling onto my side was a gargantuan effort.

I met my son for the first time 5 days after he was born. I don’t really remember it but I do have photos of us blinking blearily at one another like ‘what just happened?’ Fortunately, he had been delivered before the condition affected him (it can be fatal for the baby too) and he only spent a week in the neonatal ICU.

All the staff involved with my care were wonderful; I was even treated to a bed-based hair wash and blow-dry. I remained in hospital for 3 weeks before leaving in a wheelchair and spending another 4 weeks recovering to the point I could start looking after my baby. And there’s nothing like a baby to build your muscles back up!

It’s been cathartic writing this but most importantly I hope it helps raise awareness. Timely diagnosis of AFLP is difficult as the symptoms are so non-specific, and I didn’t even develop symptoms until the situation was advanced. Additionally, AFLP can also be confused with preeclampsia and HELLP (hemolysis, elevated liver enzymes and low platelets) syndrome as a number of features overlap.

My advice to anyone concerned about their health is to push to be seen and investigated if things don’t seem right. I’m eternally grateful to the medical professionals for recognising what was happening and ensuring that I was seen to urgently. I was very lucky to have been treated where I was; the site has strong liver and multidisciplinary expertise. Not all hospitals are able to treat the condition.

6 months on my midsection is absolutely not what it was, but all the important things like my liver are back to normal and I have a lovely little boy. I’m overjoyed I get to be a parent alongside my partner. 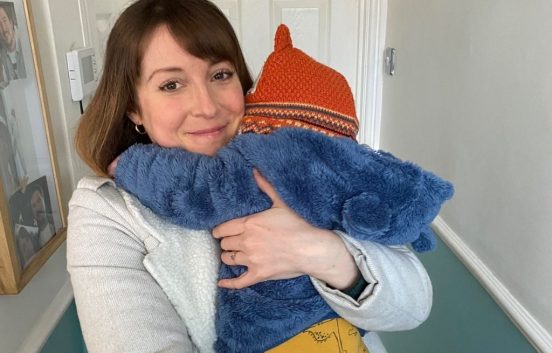