Debbie's story: "My donor's wife has been so supportive of my journey." - British Liver Trust

Debbie’s story: “My donor’s wife has been so supportive of my journey.”

Debbie had alcohol-related liver disease and a liver transplant in 2019. She wants to share her moving story with others to raise awareness of this preventable form of liver disease. Thank you very much, Debbie.

(Some people may find some parts of Debbie's story upsetting.)

I could have gone either way.

"I still remember when I had my first alcoholic drink. I was 16 years old and I had a half a cider when I was on holiday with my family on the Isle of Man. As an adult I always enjoyed a drink, but I never drank myself to oblivion - I was always a social drinker.

"In 1981, my second child died of cot death at just ten weeks old. Back then there was no emotional support for parents in that situation. I was at home with my 18-month-old and my former husband was often away from home for work or at his rugby club. I was frequently alone and felt very isolated. I would drink most evenings. It was around that time that the cracks in my marriage started to show.

"Twenty-five years later, my marriage finally broke down. I moved out and we divorced. It was a horrible time in my life. I became depressed and I drank alcohol to numb the pain, drinking earlier and earlier in the day.

"In 2004, I remarried. My new husband made a conscious effort to help me with my drinking, but I knew it was really starting to affect me. At home, I was letting things like the housework slip, and I was also done for drink driving, which was a huge wake up call. Despite this, I could still function well enough to carry on with my voluntary work at our local church.

"In 2016, I started getting the shakes and feeling bloated. I was admitted to hospital with swollen legs and I had a lot of fluid drained from my tummy. That was another big wake up call. I had counselling and joined Unity, a support group, but I was still too dependent on alcohol and went downhill very fast. I kept falling over and one day my husband came home to find me on the floor, unable to stand because my arms were too weak. That night I was very sick and we called an ambulance which took me to hospital in Carlisle. 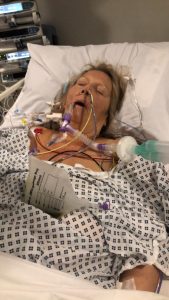 Debbie in hospital in Carlisle

"The hospital doctors thought I wasn’t going to make it and my children were called to come and say goodbye. To everyone’s amazement I managed to pull through. I haven’t had a drink since.

"My mantra has always been 'positivity and patience'"

"I was referred to the Freeman Hospital in Newcastle with a view to liver transplantation. The staff there are absolutely amazing. By that point I was feeling a lot better in myself and I was put on the list for a liver transplant.

"Throughout life, my mantra has always been ‘positivity and patience’ and it definitely paid off then. After two years on the liver transplant list (and one false start) I got ‘the call’ in September 2019. My husband, daughter and I drove for two hours to the hospital for the operation. Although I was happy the transplant was going ahead, I couldn’t stop wondering about the person who’d just died. They were at the forefront of my mind.

"After the operation, I had hallucinations due to the morphine but within 48 hours I was up and about and was sent home within a fortnight. It was a very emotional time, and I still remember sobbing in the ambulance as we came over the hill and saw the spire of our church and the sea in the distance.

"One of the first things I wanted to do was to contact the donor’s family to thank them and pass on my condolences. Communication went via the hospital at first and I was overjoyed to get a response. Over the course of a few months, I learned that my donor had died, aged 46, from a heart attack while he was playing golf. He left behind a wife and two young daughters.

"At first, I wondered whether my donor’s wife would think I was undeserving of the liver transplant, given my history of alcohol-related liver disease. Thankfully though, she has been so positive and supportive of my journey. We’re still in touch and are hoping to meet in person in the future.

"Nearly two years after my liver transplant I am happy, healthy and active. People comment on how good I look. My husband, children and friends have been so supportive and non-judgmental throughout. 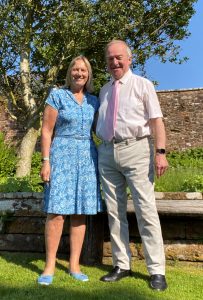 Debbie and her husband

"Although I’d never say I’m glad it all happened, there have been many positives that have come out of the experience. I’ve never used excuses for my addiction. There are reasons why I used drink to blot out or try and confront things but I was the only one who could actually change. It had to come from me. I could have gone either way and thankfully it went the right way with a lot of help and support along the way, and the generosity of my donor family."

If you are concerned about how much alcohol you drink, or if you'd like more information about liver transplant, please contact our liver nurses in confidence. 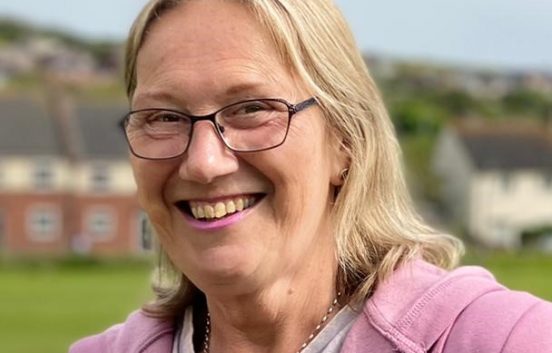