Liver disease is the most common cause of ascites 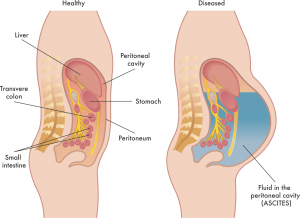 Ascites is the medical term used to describe the abnormal build-up of fluid in the abdominal cavity.  Over 7 in 10 cases of ascites is caused by cirrhosis (scarring) of the liver.

When patients suffer from cirrhosis, the liver and kidneys stop working properly and fluid stops being exchanged within the cells in the way it should. This leads to ascites.

What are the symptoms of ascites?

The main symptoms include:

You may also experience leg swelling, which in itself is not a symptom of ascites, but may often be present as well  because both are due primarily to low protein levels in the blood altering the way fluids pass through the walls of blood vessels and cells

What are the treatments for ascites?

The main treatments for ascites and oedema are sodium restriction (low salt diet and diuretics, such as spironolactone and Furosemide). It can be helpful to see a dietitian about how to manage on such a strict diet. Some patients benefit from having the fluid drained off the abdomen with a needle and tube. This usually needs to be repeated every few weeks.

Patients considered at higher risk of infection may be offered prophylactic (preventative) antibiotics to take every day.

Michael went to his GP in 2011 feeling unwell. When he was informed that he had alcohol-related liver disease, Michael stopped drinking immediately. However, the damage to his liver had already been done. Michael’s liver was failing to work properly and shortly afterwards he started having to undergo regular drainage of his ascites.

Despite giving up alcohol altogether, “I had a huge belly and tiny arms and legs - I wasn’t eating and I was tired all of the time”, explained Michael. “I had to go to the Queen Alexandra Hospital in Portsmouth to have the fluid drained – sometimes I had 14 litres of fluid in my belly.”

“I was referred to the Royal Free in 2012 for a liver transplant because my ascites wasn’t being controlled. Then the doctors there said I might be eligible to be part in a new trial, which would mean I may not need a transplant if things got better.”

The alfapump can provide a simple and effective solution to ascites.

Michael was the first patient to receive an alfapump as part of the Royal Free clinical trial and he started to feel the benefit of the continual removal of his ascites pretty quickly. He explains, “Once the alfapump was switched on it started to drain the fluid away. It was set to a certain level, I think it was a litre per day to start with and things got better pretty quickly.”

“It gave me a new lease of life. Before, I was struggling with lack of breath, lack of appetite, not really wanting to do anything and I was sleeping a lot. The pump removed fluid that was surrounding my lungs and other organs and it has been amazing, really.”

Michael now has normal blood tests and his liver scans are stable.