Sound the Alarm on liver disease in Scotland: Love Your Liver roadshow visits the Holyrood Parliament

Over 35 MSPs and their staff attended the event and most participated by taking our liver screener, which assesses the risk factors and received a liver scan. The Cabinet Secretary for Health, Humza Yousaf, Minister for Public Health, Maree Todd and Chair of the Health Committee, Gillian Martin, as well as a number of Health Committee members attended the roadshow. Jackie Baillie MSP sponsored the event and was the first member to visit the mobile unit. 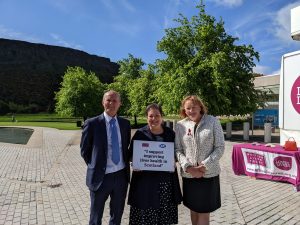 Scotland has a significant liver disease crisis with around 900 deaths each year. In 2020, liver disease was one of the leading causes of death in Scotland in those under the age of 75. Mortality rates are also four times higher in deprived areas compared to more affluent areas. One of the causes is believed to be rising levels of obesity, which has caused significant increases in ‘non-alcohol related liver disease’ over the last few decades.

Pamela Healy OBE, Chief Executive of the British Liver Trust, said: “Scotland’s liver disease statistics are shocking. 1 in 5 people may be walking around with liver disease and be completely unaware because they have no symptoms.

“90% of liver disease is reversible if detected at an early stage. Sadly, liver disease often has no obvious symptoms in the early stages and is often referred to as a ‘silent killer’. Three-quarters of people with cirrhosis are diagnosed when it is too late for effective intervention or treatment and one in four people diagnosed late in hospital sadly die within 60 days.”

We are calling on every Health Board in Scotland to have an effective pathway for the early detection of liver disease so that we can save lives and improve the nation’s liver health.”

One of the key policy calls is for MSPs to support prioritising the urgent rollout of intelligent Liver Function Tests (iLFTs) across Scotland. iLFT were developed by Professor John Dillon at Dundee University and can be implemented by all Health Boards in Scotland to improve the early diagnosis of liver disease and save lives.

“There is widespread variation in the identification, treatment and management of liver disease in primary and secondary care in Scotland. The implementation of intelligent Liver Function Testing (iLFTs) can significantly help in timely referral to specialist care and reduce the liver disease burden in Scotland.”

The event raised awareness of liver disease with Members of the Scottish Parliament and provided an opportunity to share the work of the British Liver Trust and take forward more substantive policy conversations with government to improve patient outcomes and care in Scotland.

More pictures from the event: 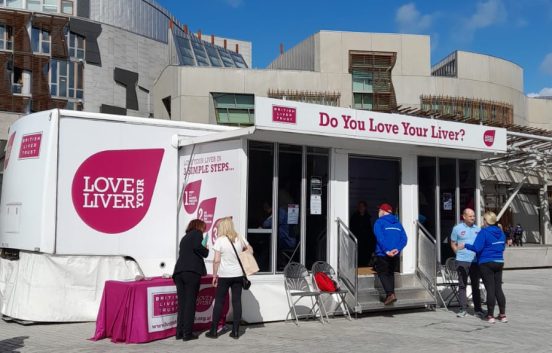