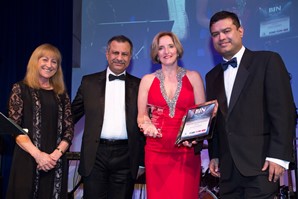 Congratulations to Louise Campbell who has won the liver nurse of the year award.

The Liver Nurse Award was sponsored by Norgine and supported by the British Liver Trust. The British Journal of Nursing (BJN) 2018 Awards recognise clinical excellence in nursing.

Judi Rhys, Chief Executive of the British Liver Trust presented the award at the ceremony held on Friday 9th March at Shakespeare’s Globe in London.

Louise Campbell has dedicated her career to advancing the cause of hepatology nursing, both in practice and in the education of other health care professionals, specifically by setting up the bi-annual liver study day, which has an excellent reputation.

Her team at Imperial College  is at the forefront of delivering liver care. Louise has been awarded a MSc with distinction much of which was based on the developments she made within her Hepatology department. Louise has also contributed to the development of her wider speciality. Examples include: a member of two global steering committees for nurse education; joint chair for the inaugural nursing g session at EASL in 2013; a founding member of a regional viral hepatitis nursing group (SERVHNG); a RCN representative to NICE; and a member of the panel for NCEPOD – Measuring the Units.

“It is important that Hepatology nursing as a speciality has strong motivated leaders, to encourage, mentor and inspire other members of the team to develop nursing care for patients. Louise is a shining example who champions the need for improvements in nursing hepatology care. Congratulations to Louise for winning this award and gaining some of the recognition she deserves.”

Congratulations to Virginia Campbell and Joanne Jones who were the runners up.