Liver disease is now the biggest cause of death in those aged between 35-49 years old, new report reveals - British Liver Trust

Liver disease is now the biggest cause of death in those aged between 35-49 years old, new report reveals

New analysis of data of deaths in England and Wales released by the British Liver Trust has revealed that liver disease is the biggest cause of death among 35 to 49-year olds in the UK.

In 2017, 998 men and women aged between 35 and 49 died from liver disease, which represented 10% of all deaths in this age group; greater than deaths from suicide, heart disease and breast cancer.

The alarming impact of liver disease’; launched today to coincide with Love Your Liver week presents the latest statistics on liver disease and liver cancer in the UK. The British Liver Trust report pulls together data from over two hundred sources and highlights the scale of the liver disease crisis affecting the UK. Other  alarming facts highlighted in the report include:

More than 90% of liver disease is due to three main risk factors: obesity, alcohol and viral hepatitis.

Liver problems develop silently with no obvious symptoms in the early stages yet if caught early, the disease can be reversed through lifestyle changes.   More than three-quarters of people with cirrhosis (scarring) of the liver only find out when admitted to Accident and Emergency. By this time it is often too late and the charity is calling for more awareness and screening in the community.

Pamela Healy, Chief Executive, British Liver Trust said, “We are facing a liver disease epidemic in the UK. Helping people understand how to reduce their risk of liver damage is vital to address the increase in deaths from liver disease. Although the liver is remarkably resilient, if left too late damage is often irreversible. I would urge everyone to take our online screener on our website to see if they are at risk.”

Professor Steve Ryder, medical advisor to the Trust and consultant physician at Nottingham University Hospital NHS Trust said, “The increase in deaths from liver disease is in stark contrast to other major killer disease such as heart disease and many other cancers where the numbers of deaths have remained stable or decreased. A lack of awareness together with the stigma that surrounds it means that liver disease is consistently overlooked and underfunded.”

The British Liver Trust’s Love Your Liver campaign aims to reach the one in five people in the UK who may have the early stages of liver disease, but are unaware of it. It focuses on three simple steps to Love Your Liver back to health and reduce your risk: 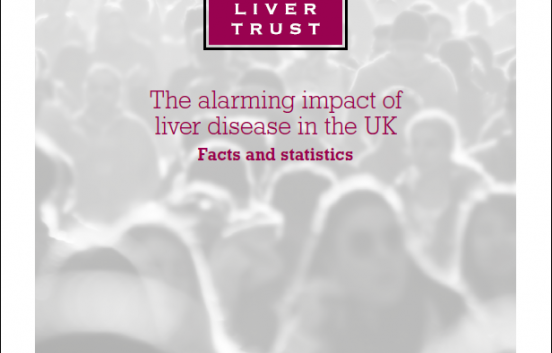