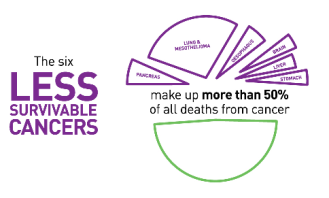 The British Liver Trust has joined with four other charities to launch the Less Survivable Cancer Taskforce.

This shocking disparity has been revealed by the Less Survivable Cancers Taskforce, on the day of its UK launch at Westminster. Five charities have joined forces to transform the future for people with pancreatic, liver, brain, lung, oesophageal and stomach cancer, united in their determination to give patients a fair chance of living for longer.

The new analysis by the Less Survivable Cancers Taskforce also shows that the six less survivable cancers cause half (51 per cent) of all deaths from common cancers in the UK per year; causing close to 70,000 deaths.

The Taskforce, which is made up of the British Liver Trust, Pancreatic Cancer UK, The Brain Tumour Charity, Action Against Heartburn and Core, says that the unacceptable prognosis of the six cancers is due to a number of factors, including a lack of research. Over the last 12 years, the six diseases received just 17 per cent of UK research funding for common cancers, with the remainder dedicated to the 11 more survivable cancers. Other reasons for the poor prognosis include late diagnosis, a lack of treatment options and low awareness of symptoms.

MPs, research funders, GPs and other healthcare professionals will hear at today’s launch event how the Less Survivable Cancers Taskforce will drive forward change to ultimately give patients with the six diseases the same chance of surviving as those with the more survivable cancers, which include prostate, breast and bowel cancer.

John Baron, MP for Basildon and Billericay and Chair of the All-Party Parliamentary Group on Cancer, is sponsoring today’s launch event at Westminster. He said:

“It is very concerning that someone diagnosed with one of these six cancers – pancreatic, liver, brain, lung, oesophageal and stomach – has, on average, just a 14% chance of living beyond five years after their cancer is detected. Whilst over the last 40 years the five-year survival rate has almost doubled for breast cancer and prostate cancer, these six less survivable cancers are more or less as deadly as they were in the 1970s.”

“The APPGC’s success in getting NHS England to focus on Clinical Commissioning Groups’ one year cancer survival rates should encourage earlier diagnosis for all cancers. However, we need to do more to ensure that these less survivable cancers receive the appropriate attention, particularly when it comes to research funding, improving diagnosis and treatment.”

The Less Survivable Cancers Taskforce is now calling on MPs, policy makers, research funders, GPs, nurses and other healthcare professionals, and patients and families, to help it achieve its goal by:

To get involved and for more information about the Less Survivable Cancers Taskforce, visit www.lesssurvivablecancers.org.uk