Children watching just one episode of Britain’s Got Talent saw over four and a half minutes of adverts for unhealthy food and drinks – including pizza, burgers, ice cream, cake and chocolate biscuits, analysis by the Obesity Health Alliance (OHA) shows.

Research shows that seeing 4.4 minutes of food advertising is associated with children eating 60 more calories a day (i) – and eating as little as 46 extra calories each day can lead to excess weight in children. (ii)

NAFLD is a build-up of fat in the liver. About 2 to 3 people in every 10 have this condition. Even young children can have NAFLD. In most people it is not harmful, but sometimes it can get worse, causing the liver to scar. For some people, it can cause the liver to stop working completely.

The British Liver Trust, which is the UK’s leading liver health charity, suggests that NAFLD will overtake alcohol-related fatty liver disease as the leading cause of liver disease in the UK unless urgent action is taken.

Vanessa Hebditch, Director of Policy and Communications at the British Liver Trust said, "The emerging epidemic of childhood obesity means that increasing numbers of people will have NAFLD. This is a serious condition that is more common than people realise and can lead to liver failure, liver cancer and transplants in the future. "

This new analysis shows that such levels can be reached during just one TV show, demonstrating how popular family TV shows are used to ensure unhealthy food and drinks are kept firmly in the spotlight in children’s minds.

The OHA studied the adverts featured before 9pm, during six live episodes of Britain’s Got Talent shown over one week in May and June 2019. Britain’s Got Talent is the most popular TV show with children aged 4-15, regularly watched by hundreds of thousands of children.iii Yet under the current rules, it is not classed by the Advertising Standards Authority as a TV show ‘of particular appeal’ to children.  Analysis revealed:

Caroline Cerny, Alliance Lead at the Obesity Health Alliance said:  “This analysis clearly demonstrates how the food industry makes sure their sugary and high calorie food products are kept firmly centre stage in children’s minds. This type of advertising is clearly linked with children going on to eat more calories than they need.

"A comprehensive 9pm watershed on unhealthy food adverts on TV and online would ensure children can enjoy their favourite programmes without being flooded by adverts for pizza, burgers and ice cream.”

Malcolm Clark, Policy Manager at Cancer Research UK adds: “The world we live in doesn’t make it easy to be healthy, and children are especially vulnerable to the onslaught of adverts that nudge us towards foods loaded with fat, salt and sugar.

“Research shows that time spent online and watching commercial TV quickly adds up and makes children more likely to ask for, buy and eat junk food – which is why the industry bombards them with unhealthy messages. Government and regulators must step in to protect the health of the next generation.”

This analysis is a snapshot content analysis of one TV programme popular with children, but it provides an important real-world of example of the scale of unhealthy food adverts seen by children.

Research by Kantar, commissioned by the Department of Health and Social Care and the Department of Culture, Media and Sport estimated that children see 2.3 minutes of HFSS advertising a week. This figure was based on average exposure across the population. This analysis shows that hundreds of thousands children saw double this amount, during just one TV programme.

The OHA wants to see a 9pm watershed on junk food adverts implemented across all media devices and channels - including live TV, TV on demand, radio, all types of online, social media, apps, ingame, cinema and digital outdoor advertising such as billboards.

Online pollingiv reveals that public also support these measures to protect children from the harmful
effects of junk food marketing, with:

The British Liver Trust works as a key member of the Obesity Health Alliance to campaign for a number of policy interventions that will help address the wider environmental factors that lead to excess bodyweight, as well as the social inequality and cultural differences in overweight and obesity prevalence. 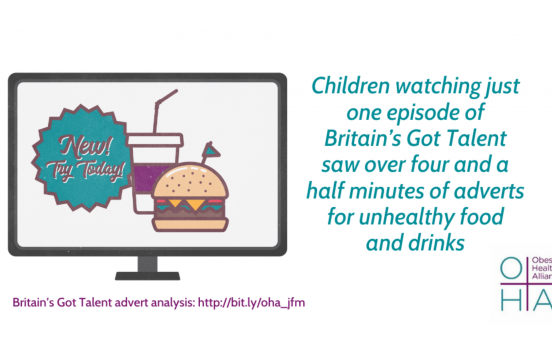