Wendy's story: "It helped knowing someone else with my condition." - British Liver Trust

Wendy’s story: “It helped knowing someone else with my condition.”

Wendy has haemochromatosis and felt ill for a long time before she was diagnosed. Thank you for sharing your story, Wendy.

I felt very lonely because I didn’t know why I was still so ill.

In 2018, when I was 68, I had terrible hip problems and also felt very unwell. I was often sleepy and whatever I ate or drank made me feel nauseous. There was also a pain on my right hand side that wouldn’t go away.

By 2019 I was in a terrible state and was shivery and very queasy. I saw a locum doctor who dismissed my symptoms and the results of my urine test as she thought my problems were muscle related.

Despite this I was still feeling very ill – so much so that I reluctantly decided to retire early from my job as an antiques dealer. I went back and forth to my doctor many times and was eventually sent for an ultrasound which revealed polyps in my gallbladder. My doctor thought this must be the cause of my symptoms. They told me to be careful what I ate and drank, but didn’t send me for further tests.

I followed the doctor’s advice but by the end of the year I was still very unwell. The tiredness was unbelievable and I was starting to get very confused. By this stage I was feeling very lonely because I didn’t know why I was still so ill.

Eventually I became so tired of it all that I called the hospital and asked how much a private MRI scan would be. The nurse told me that because I was so unwell, I should go back to my GP and insist on being referred to a specialist, which is what I did.

I was referred to a gastroenterologist who gave me an MRI. The scan revealed that my liver was full of iron deposits and my iron levels were high. Suddenly everything moved very quickly and I was diagnosed with haemochromatosis. I was treated with a phlebotomy to remove the iron and received excellent care throughout the pandemic.

I now know that my bone problem is also a part of this condition but it can affect people in different ways. It’s been a difficult time because not many people know about haemochromatosis, including some healthcare professionals. Because of my age and my liver health, I’m not sure what the future holds. I have lots of blood tests to monitor my condition and I still watch what I eat and drink. Fortunately, my iron levels have come down really well and I’m working again.

I joined the Haemochromatosis Society, and by chance, I found out that another antiques dealer I’d known for 20 years also has the same condition. I find it really helped knowing someone else to talk to about what we’re going through. 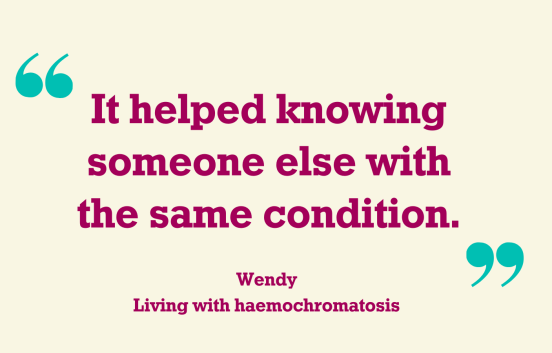