Tammy's story: "Your life is the best gift you will ever be given. Please protect your liver." - British Liver Trust

Tammy’s story: “Your life is the best gift you will ever be given. Please protect your liver.”

Tammy was diagnosed with alcohol-related liver disease and cirrhosis in July 2020. Thank you for sharing your story, Tammy.

I do anything I can to protect and help my liver to repair the parts that can be saved.

Six years before I was diagnosed, I was warned by the doctors that if I did not stop drinking this would happen, but I was ignorant in thinking that it would not happen to me.

I had not really heard of it as it is not given the awareness that it needs. Not ready or wanting to admit to the fact that I had a drinking problem, I continued as normal. Not everyday, but when I started I would binge and party for days.

Eventually though, after losing many family members, especially my close cousin Sheila who was like my sister, I started to drink practically everyday. I was in hospital twice and each time I came out I would stay sober for three months but return to drink.

I had a brilliant upbringing and have a supportive family but my late twenties and early thirties were very dark times for me. I was suffering from depression and anxiety but was drinking to hide this from the outside world. In the end I hit rock bottom and was losing and lost everyone that was important to me. I was hurting them as well as hurting myself and would be drinking morning till night and suffered from hallucinations.

In July 2020 I was hospitalised for four weeks after being admitted into a rehab centre in Weston-super-Mare (thanks to Reset in Tower Hamlets) who sent me straight to hospital as I was yellow and weak. Straight away I was given the best care and I cannot thank them enough for saving my life.

Whilst there I had numerous tests including a Fibroscan, ultrasounds, an endoscopy, MRI scans, blood tests everyday, blood transfusions and also had to be fed through a feeding tube as I just could not gain my appetite. I also developed ascites. Eventually my liver started to bleed and I was rushed to intensive care in Bristol. My family were all in London and the doctor called my mum to come as soon as she could as I only had a 30 per cent chance of surviving. They all got the first train down. The embolization procedure was successful after five hours and from there I was on the road to recovery.

I came home on 7th August and since then I have been getting amazing help and support from family and friends and The Royal London Hospital. The NHS are are amazing. Also from Turning Point in Hackney where I am on a course called Wellbeing and mindfulness.

I am now over six months sober and can not express how important it is to ask for help and not be ashamed of it. Six months ago I was told I would need a liver transplant but I have turned my life around and my blood results are practically normal so I will now be having an MRI, a fibroscan and more blood tests to find out if I will still need to have one.

I've had to change a lot (for the better). I'm studying so I can go back to working in finance, the job I used to love, my daughter is back home living with me and doing so well in college, and my relationships with my friends and family are strong once again.

I do anything I can to protect and help my liver to repair the parts that can be saved. No alcohol, a low salt diet and exercise and taking it day by day. I urge anyone who thinks they may be drinking too much to get a blood test and listen to your doctor about the results. Don't ignore it because I never thought I would end up in the situation I am in now and it really can happen to anyone.

I attend online meetings with the British Liver Trust and they have been so helpful. Cirrhosis is irreversible but if you have a break from drinking (at least three consecutive days each week) and look after your liver you can avoid it getting to this stage as it can repair itself. My message is please ask for help because there is help out there and it’s never too late to change. Your life is the best gift you will ever be given -  please protect your liver. 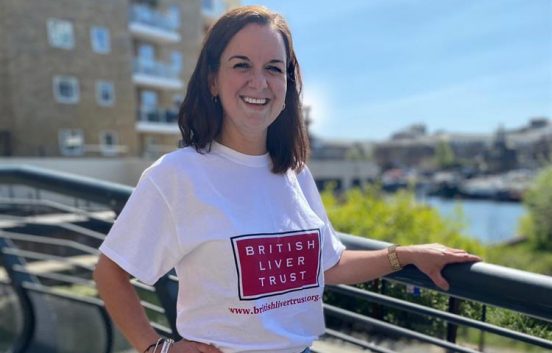