The consultant hepatologist said the only solution was a transplant and was extremely hopeful this could be done as long as the tumour didn't get much larger and my health remained good.

I was diagnosed on 2nd July 2014 following a CT scan of my liver as part of an investigation for a low platelet count. The tumour was growing fast and already almost too large to be operable. This came as a massive shock. Apart from a 'slightly fatty liver'. as far as I was aware, there was nothing in my medical history to suggest anything was wrong or likely to go wrong. My liver function tests had always been good, right up to May 2014. I had low cholesterol, normal blood/sugar, pulse and blood pressure. Except for being overweight since childhood I had always been fit, healthy and active and still was.

The consultant hepatologist said the only solution was a transplant and was extremely hopeful this could be done as long as the tumour didn't get much larger and my health remained good. From that very moment, right in the middle of the appointment, I decided to accept the situation, make sure I fully understood all the risks, be positive and focus my energy on the certainty I would make a full recovery. I told the consultant I wanted full and straight facts and nothing coloured so I knew exactly what I was dealing with and could do whatever possible to give myself the best chance. For example, I subsequently signed up for every piece of research offered, including new methods of transplant. At every stage I urged myself to beat the percentages and struggle to do things better and more quickly. I've always been a believer in the power of positive thinking and this was an opportunity to put that into practise.

In early August, 2014, I successfully underwent Tansarterial Chemoembolization (TACE) aimed at stopping further growth of the tumour. I was out of hospital in 2 days and comletely recovered within a week. After a wide range of medical tests and consideration of how I would cope with a transplant, I went on the waiting list at the end of August.

I was called for my transplant at 3am on Thursday 15th January, 2015, went to theatre at 8am and was finished by 1 pm. I was out of ICU and on the ward by Saturday morning, walking by Sunday and discharged on Tuesday 20th January, which I'm told is a hospital record for the type of transplant I had. I was back walking a mile within a month.

There have been a couple of minor hiccups since. In April it came to light the donor liver had suffered slight damage to the biliary tree during the transplant, which is a known but unlikely risk. However, with appropriate medication I've coped with this extremely well. Also, due to the effects of the immune suppressant drugs required to stop rejection, I've needed treatment for precancerous cells on my face and scalp, which is also not very unusual.

Except for getting tired occasionally, perhaps due to the emotional strain I've endured, I'm otherwise as fit and active as ever and perhaps more so.

I've seen other people at appointments over the last 18 months and believe I've faired very well. I think this is due at least in part to positive attitude and great optimism, as well as brilliant care and the love and support of my wife and family. I'm extremely proud of myself and would like to share my example with others. Yes I had fears, but I put those in a proverbial box only to be opened under close supervision with my wife. Other times I ensured I remained happy and jovial. I'm catching up with my life. Visits to family in France, Italy, Switzerland and Ireland, escapades with grandchildren, walking volcanic landscape in Lanzarote and hill walking in the Scottish Highlands, Northumberland and North Wales. Except for getting tired occasionally, perhaps due to the emotional strain I've endured, I'm otherwise as fit and active as ever and perhaps more so. Family, friends and I find it hard to imagine there was ever anything wrong. Except for 2 short periods when undergoing treatment and just after the tranplant, I never really felt unwell. While unlucky to get NASH & HCC, I've been extremely lucky to have come through it so well. This has all happened after I retired and before I got involved in any other work style activity.

My close family have been very worried and probably more so than me, perhaps because they felt out of control and it would be them that would suffer my loss. I want to make the most of this new life chance. While in one way I have a greater recognition of my own mortality, having seemingly come through this so well, in another, I have a feeling of invincibility. 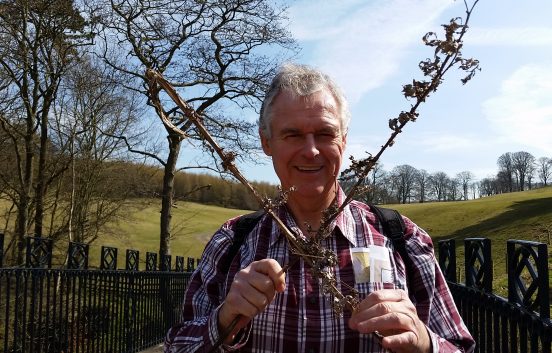