Rebekah's story: "It felt like our world was falling apart." - British Liver Trust

Rebekah’s story: “It felt like our world was falling apart.”

Wilson’s Disease is a rare genetic condition in which you have a higher than normal amount of copper in your body.

Rebekah’s youngest son (pictured) was diagnosed with the condition at seven years old in 2020, and her eldest son was diagnosed in 2021. She shares her experience from a parent’s perspective. Thank you, Rebekah!

It’s a relief to know I wasn’t imagining something was wrong.

“As a parent, you know your child better than anyone and you notice when something’s not quite right. That’s how I felt for years about my youngest son Jake. Since he was a toddler, he’d had various symptoms like additional social and emotional needs, and constant pain in his legs.

“I took him to the doctors several times, but it wasn’t until I pushed for a blood test that we realized he had a problem with his liver. Jake had a liver biopsy in October 2020 and was diagnosed with Wilson’s Disease. My eldest son Jaylen was also diagnosed with the condition in January 2021, even though he has no symptoms. It’s a rare condition and even more unusual for both siblings to have the condition.

“It’s a good job I pursued the blood test. If my sons hadn’t been diagnosed so young, their symptoms could have become more serious and they might have needed a liver transplant in the future.

“I’d never heard of Wilson’s disease before. It’s a genetic condition that can appear in people whose parents both carry the gene. We found the information about it on the British Liver Trust’s website useful, and we’ve had support on the Facebook groups, from the Children’s Liver Disease Foundation and the boys’ teachers who have been amazing. The paediatric doctors at Nevil Hall hospital were our saving grace, and also the liver team at Birmingham.

“As a parent of a child with a rare disease, you wish it was you going through it and not them. When they were diagnosed, it felt like our world was falling apart. I think the pandemic made it twice as hard because you can’t get support from friends and family in the same way as you normally would.

“We’ve been on a long journey together as a family. My boys will need to take medication for the rest of their lives but with the help of friends and family we will try our best to make sure they live as normal a life as possible.

"It’s a relief to know I wasn’t imagining something was wrong. Despite everything, our children brighten our day – they’ve been so brave throughout.” 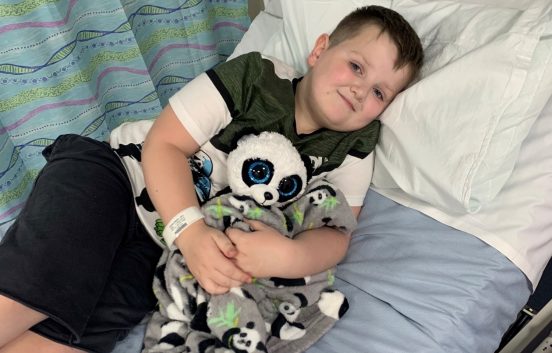