In April 2015, I moved to Scotland to start a new job which involved significant overseas travel – in the region of 12 to 16 weeks each year. About eighteen months later, in September 2016, I started feeling very fatigued and lacked the energy to complete tasks that wouldn’t have made me feel that way previously. There were other signs that something wasn’t quite right. For example, while looking for a suit for a friend’s wedding that month, I noticed I had put some weight on and that previous sizes were no longer accurate. This led to me feeling uncomfortable and uneasy. It was certainly a strange feeling but I put it down to elements of my lifestyle at the time.

About a month later, I went to Saudi Arabia for work and on occasions found it very difficult to get out of the SUV taxi that I was travelling in on a daily basis. I knew something was wrong.

When I went back to the UK for a few days off and to celebrate a friend’s birthday, things got worse. I was coughing a lot and experiencing difficulties in breathing, with notable chest and back pain with my stomach feeling ‘full’. It was increasingly difficult to sleep flat lying down as this was causing discomfort and led to restlessness. I called in sick to work and booked an emergency GP’s appointment with a locum and was given antibiotics as it was believed I had a chest infection.

A few days later I travelled down to London to see family as I was due to fly out from Heathrow to Dubai for work, so I decided to spend time with my dad and take him to an American football match at Wembley Stadium, which I had purchased as a gift for his 60th birthday. He noticed my feet were swollen and that I had to take breaks in between short walks to and from locations. He suggested going to A&E as he had seen this type of thing in my paternal grandfather who was diagnosed with a heart condition and one of the symptoms was swelling caused by fluid retention.

I also regularly travelled to parts of the world where alcohol consumption wasn’t permitted, such as parts of the Middle East, and in general was fairly confident in my assertion that alcohol wasn’t the direct cause of my ill health.

Initially I resisted but said that I would visit A&E the following morning if things did not improve.  As the next morning passed, I felt worse and asked my mum to call a cab to take me to A&E at Northwick Park Hospital, where I was taken in to ambulatory care.  Once seen and given Furosemide, a diuretic, to try and get some fluid out of my system as it became clear that I was retaining fluid for a reason not yet known. Upon being weighed, I was asked if the measured weight (131kg) was my regular weight, which I was certain I wasn’t, and about 15-20kg over the weight that I was aware of a few months before.

Although a heart problem was initially thought of as the reason for me feeling unwell, a CT scan showed that I had an enlarged spleen and swollen liver. The first question I was asked was about my use of alcohol and if/when I drank. I am not a big drinker… I might have one big night but then not drink for a month.  I also regularly travelled to parts of the world where alcohol consumption wasn’t permitted, such as parts of the Middle East, and in general was fairly confident in my assertion that alcohol wasn’t the direct cause of my ill health. This wasn’t scientific but based on knowing one’s body, something which I think is really important for anyone reading this and with this condition especially.

Due to my regular travel overseas (including having visited sub-Saharan Africa and South America in the 4 years prior to my admission), a tropical disease related cause was investigated but I had ensured I was fully vaccinated through my employer given I travelled predominantly for work.

After just over a week as an inpatient, I had a further two weeks of testing for a range of conditions, including liver conditions like Wilson’s disease, Hepatitis and Budd-Chiari, all of which were ruled out, as well as a tumour on the liver. I also had an endoscopy to check for oesophageal varices/portal hypertension and eventually I was told I had NASH (non-alcoholic steatohepatitis), a form of NAFLD (nonalcoholic fatty liver disease). I accepted this diagnosis but remained unconvinced. I was told that I needed a liver biopsy to confirm this diagnosis, and after a ‘drain’ procedure, approximately 12-13 litres of ascitic fluid (commonly referred to ascites) was removed the biopsy was undertaken. I was then discharged from Northwick Park Hospital in late November 2016, after 25 days as an inpatient, with a follow-up due a couple of weeks later to discuss the biopsy results – unfortunately the biopsy was inconclusive.

It was just before Christmas 2016 when I developed an infection on my leg: I was subsequently readmitted as an inpatient after visiting A&E at Northwick Park hospital and spent the first ten days of this readmission fighting to clear the infection.  I had a Doppler Ultrasound on New Years’ Eve and the radiologist was of the view that my being unwell wasn’t down to NASH/NAFLD but perhaps something autoimmune. I challenged my hepatology consultant’s diagnosis and was told that they disagreed with the radiologist, at which point my patience was wearing thin as I had nearly 40 days in hospital over two admissions without what I believed was a correct diagnosis. I had been told in December 2016 that a transfer to the specialist liver unit at the Royal Free Hospital had been requested as a transplant was required in their opinion – at this point in early January 2017 I requested for this to be expedited.

At the end of that week in early January 2017, I was transferred to the Royal Free Hospital where within three or four days I was informed that a transplant shouldn’t be necessary and that I had Budd-Chiari. The patient information leaflet on the British Liver Trust website, which I helped review, explains in detail how the condition works but it is very rare as it affects 1 to 4 in every million with females more likely to be affected than males.

A surgical procedure by the name of TIPSS was performed through the jugular vein, with a shunt inserted to allow fluid/blood to flow properly once again.  Prior to TIPSS, I also had to have an EEG, which records brain activity, to ensure that the toxins released from my liver hadn’t spread to my brain. This is because when the liver isn’t functioning properly, toxins can build up in the bloodstream and potentially enter the brain which can lead to hepatic encephalopathy.  After the EEG and TIPSS, and some recovery time, I was discharged after a total of 59 days as an inpatient, over two separate admissions (October 2016 – January 2017).

I continue to see a liver disease consultant and haemotologist at the Royal Free.  I also take anticoagulation medication and have to be careful with my diet due to the warfarin and the interactions it has with various foods and drinks, such as leafy green vegetables.

I decided to change roles within the organisation I worked in (they were supportive of this to which I am grateful) due to the difficulties in having a rare condition and travelling to parts of the world that may not be able to treat such a rare condition. Fatigue comes with liver conditions in general but I am fortunate that I work in a role which allows me to use my skills but plan my work and day in a way that I can contribute as much as I can. I have communicated with others that have Budd-Chiari Syndrome and some never return to work, so feel rather fortunate that after seven months off in total and two months of phased return, I work full time and have been doing so since July 2017.

I enjoy supporting the British Liver Trust by reviewing information, particularly on my condition, which is so rare.  I also engage with people who have Budd-Chiari across the world sharing my experiences and offering advice where I can.

I am a big supporter for the British Liver Trust’s Love Your Liver campaign.  I attend the roadshows when I can and tell people I know to take the online screener.  Due to sharing information on social media and at work, a colleague of mine attended a roadshow event in the city we work in and found the advice gained useful to the extent that changes in lifestyle followed. I am really keen on raising awareness of both Budd-Chiari and liver disease in general, as I don’t feel either gets the attention it merits, and hope that I can continue to support the British Liver Trust in doing this. I am always happy to share my experiences and talk about what I went through as I am aware that people often find it difficult to speak about these types of things, something which can affect mental health negatively.

I am thankful to the wonderful staff I encountered during my time as an inpatient, especially at the Royal Free, as they made dealing with this lifetime condition a lot easier. Friends, family and colleagues have been very supportive as have the British Liver Trust and I hope that anyone reading this will be able to benefit from the sharing of my story. 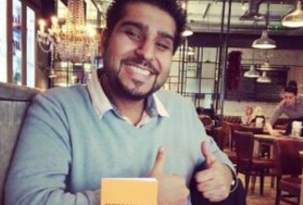