Lindsay’s story: “I never monitored my alcohol intake beyond ‘hangover’ or ‘no hangover’” - British Liver Trust

Lindsay’s story: “I never monitored my alcohol intake beyond ‘hangover’ or ‘no hangover’”

As a busy professional who travelled frequently, Lindsay’s overall health suffered until liver disease eventually turned her life upside down. Thank you for sharing your story, Lindsay.

"Hi, I’m Lindsay. I’m 42 and was diagnosed with liver disease in 2014. I’d not had liver problems previously. I was a non-executive director for a blue-chip company.

My liver health prior to being diagnosed never crossed my mind. I associated liver disease with alcoholism or cancer, and George Best was the poster boy.

Being young and, in my mind ‘invincible’, I didn’t in a million years think I would become a liver patient, frequenter of gastro wards, teetotal or a ‘last rites’ priest groupie.

“Before I became a statistic I’d always eaten a balanced diet, but I had an obese period in my early 20’s as I morphed into a workaholic, living on hotel room service, airport fayre or the always-delicious garage meal deal option. Add this to a sedentary desk job, no time for netball, the gym or walking.

“I distinctly remember wondering how every mirror I looked into appeared to have been replaced by one more suited to a ‘fun house’ at Blackpool! However, I didn’t know that then and I treated the symptom I could see, ie. my weight.

“I’ve often thought that in 2008 I missed an opportunity to stall, stop, slow or deal with any liver issues hiding behind my weight - silently taking hold of me then and in my future. Being an economist, I dealt with my weight with the same basic rule I applied to most problems back then. My magic formula of the quickest, easiest and most efficient solution to any problem is option A. In this case, I had a gastric bypass surgery.

“I suspected that I had a fatty liver. I knew the terminology but only associated it with foie-gras and corn syrup in fizzy drinks (which is responsible for producing the human foie-gras equivalent!). That’s where my knowledge and interest ended. I was indeed ‘blissfully ignorant’.

“However, like many people, I couldn’t ignore the one thing I knew could potentially damage my liver, ie. booze. Well, in my case, booze. A large glass at ‘wine o clock’ - a reward for a hard day. A welcome guest accompanying my candle lit bath, a de-stresser. I was a workaholic, travelled and stayed in hotels weekly and networked and entertained customers. A bottomless glass that gets topped up for you and where the bill goes on account. I never monitored my intake beyond ‘hangover’ or ‘no hangover’ but it was way above 14 units per week.

“I don’t remember getting ill beyond maybe being tired and some stomach pain until I got water retention in my legs. I didn’t see my GP - I thought I was just run down with work - until I started getting ‘leaking legs’. A hot, sticky sap-like fluid leaked from my legs and I remember my Ugg boots becoming sodden. Sitting in Nando’s, it looked like I’d urinated on the floor.

“I went home and my brother called an ambulance. On my first admission in Bury Fairfield Hospital I was told I had hours to live and was in acute liver failure. I remember three things: 1) I had to tell my child who was 11; 2) I had no Will so I dictated one that day; 3) I had the last rites. I’m Catholic and my faith was important but now it is stronger than ever.

“After the initial five months as an inpatient, three more last rites, one resuscitation, several fits, being tube fed and going down to 40kg, I went home tentatively. Once home the struggle began - a wheelchair, a fall alarm, 26 pills daily, constant pain and Morphine, tachycardia, breathlessness and ascites!

“I’m currently ‘stable’ but forever high risk, forever changed. I’ve continued to improve, I volunteer, I exercise, I meditate, pray and have ‘me time’. But just when I thought I’d seen it all I hadn’t - welcome Mr Hepatic Encephalitis and Mrs Psychosis. This is by far the most life altering, terrifying experience of my life. After one episode I woke up in Warrington A&E, handcuffed in bed, having crashed on the M62. I have no memory of this.

“As you can see my life has been turned upside down. I’ve been through so much yet I’m still here. I’ve lost friends and nearly my own life to this ignored silent killer that only rears its ugly head when it’s often to late or life limiting. That’s why I’m supporting the Sound The Alarm campaign.” 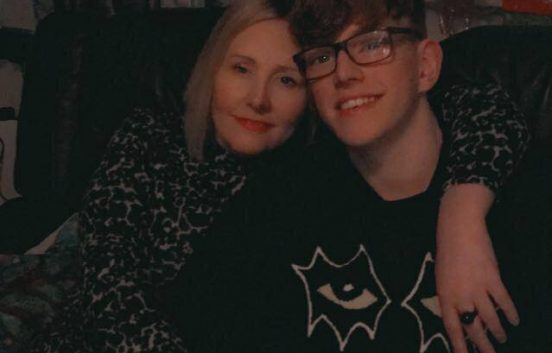