Jackson’s story: “Diet plans have really made a difference”

Jackson has stage 3 non-alcohol related fatty liver disease (NAFLD) and is taking steps to avoid progression of the disease. Thank you for sharing your story, Jackson.

I think I’ve been through a grieving process over my body.

My story starts similar to others in that something was found out to be wrong during a slew of blood tests for another condition (type 2 diabetes).

I was told by my GP that they needed to do a further blood test to do with my liver. I had a fibroscan of my liver in January 2021, which showed that I had non-alcohol related fatty liver disease (NAFLD). When I got the call informing me of the initial diagnosis I was not prepared. It was a huge shock. I remember the consultant saying medical terms I could not understand. I remember the consultant talking about bariatric surgery, that I had something people 20 years older than me would typically have, and then a liver biopsy. At the end of the call I was scared and did not know exactly what I had as the shock made it hard to recall what had been told to me.

I immediately searched for sources of support and the British Liver Trust came up. It was with them that I signed up for their Zoom support group meetings. Being in moderated meet-ups with others who had similar conditions as me, all of whom were in different stages of their diagnosis and treatment, was an enormous source of support. Their experiences were invaluable, from telling me to make written notes during any meetings/consultations with medical professionals, to what would happen during a liver biopsy.

In March 2021, I had my liver biopsy and I was totally prepared with audiobooks and music to keep me entertained while I spent most of the day in the hospital lying down after the 5-minute procedure itself. The diagnosis came back with Stage 3 NAFLD and this time I was prepared with a notebook and wrote down the salient points during the phone consultation.

I did not expect the diagnosis to be this bad and I’m gutted. Thinking back over the years, certain infections and my fatigue (tiredness that was commented on by my friends) were clear indicators of type 2 diabetes and earlier stages of liver disease. I am certain that if checks had been done sooner or if my former GP had not dismissed my excessive tiredness, my liver disease would have been diagnosed a lot sooner.

The way out of this is a healthy diet, and plenty of exercise (two things I’ve not typically engaged in for large chunks of my life). Mentally, it has been very hard. I think I’ve been through a grieving process over my body. It has been a battle with dark mind games of self-blame, low self-worth and catastrophizing in connection to the diagnosis. I’m a lot more conscious of my body, how it fits into my clothes and any weird sensations or tweaks of pain.

The good news is that I listen to the experts. I’ve had therapy for a few years. A clinical dietician who works with people with my diagnosis has been drawing up diet plans for me that have really made a difference. The resources of the British Liver Trust are invaluable: booklets about all the different liver diseases, a dedicated helpline staffed by liver nurses that I called for clarification on information, support groups and, best of all, a life size “squeezy” liver that I keep on my desk to remind me what I’m making huge lifestyle changes for. 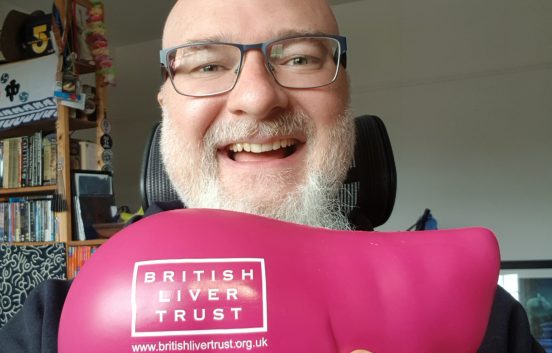