How volunteering with the British Liver Trust has helped me

Before I was ill I knew very little about the liver and how important it is 500+ functions!

I was diagnosed with liver disease in early September 2018 after an emergency hospital admission. My life was saved in hospital but what could have helped me on discharge would have been more information about the condition I had been diagnosed with and how to live with it. I was bewildered and fearful about the future. Thankfully I was told about the British Liver Trust by a friend.

The information and support provided by the charity was a real game-changer, and over time I learnt I could live with my condition and live well by implementing the suggestions made with the help and encouragement of my GP. This took time, effort and a willingness to change.

Compared to the period around the time I was admitted to hospital I feel great – mentally as well as physically. Although my liver is damaged, I’m unlikely to ever need a transplant as I’ve done everything suggested including abstinence from alcohol and making significant changes to my diet. I take medication as well.

The British Liver Trust is a fantastic charity which does extremely important work. As I got better I started thinking about volunteering for the charity at the grassroots level. Before I was ill I knew very little about the liver and how important it is 500+ functions!

Research suggests 90 per cent of liver disease is preventable so we need to look after it which is why the British Liver Trust’s Love Your Liver campaign is so important. The liver is robust and patient but when it starts to struggle a person can feel and look very unwell very quickly. Sometimes the physical symptoms are obvious and sometimes not.

As a volunteer I was able to discuss liver disease in a very general way and many people seemed to relate to what I was saying. 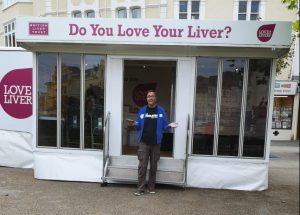 Volunteering at the Love Your Liver roadshows in Wales in October was a great experience. It was good for my confidence which is taking time to rebuild plus I love to chat! It was also good to talk to people waiting for the screening and scan from a patient and non-professional’s perspective about how important the liver is.

People were in general very surprised that I have a liver condition because I look so well. As a volunteer I was able to discuss liver disease in a very general way and many people seemed to relate to what I was saying. I felt what I had to say was helpful and the feedback I received was really good for my personal growth.

The campaign is not anti-alcohol, anti-salt or anti-sugar but what it does is provide clear guidance about preventative lifestyle changes that can be made: Being aware of units in alcoholic drinks and the sugar and salt content in pre-packaged foods and choosing healthier options plus exercise. These are low-key changes that people can make over time. Alcohol, sweets and crisps, for example, can still be consumed but sensibly and in moderation while also being mindful of units, sugar and salt content.

I’m looking forward to next year’s campaign when I’ll be volunteering again. I look forward to meeting you at the shows! 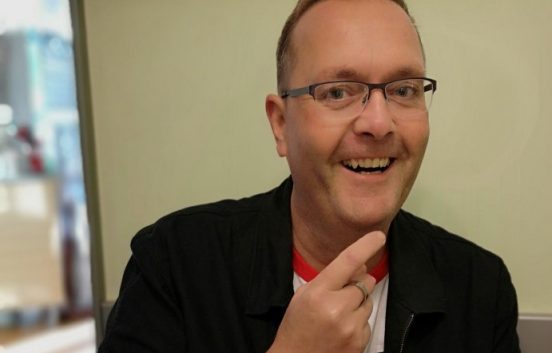