People think I am younger than I am, so I show them the photo of me before I was diagnosed – and they can’t believe the change.  Since joining the support groups I’ve kept up a healthier diet, and I joined a ramblers group.

People meet me and they don’t know my story, and they are shocked to find out that three years ago I was overweight and had Non-Alcohol related Fatty Liver Disease – or NAFLD.

When I was first diagnosed I wasn’t ill enough for a transplant, even though I was really ill.  After years of knowing something was wrong, and being misdiagnosed, it turned out that my shortness of breath was caused by liver disease – not asthma as they had thought.  The NAFLD diagnosis came after I swelled up with fluid – something known as ascites – which was treated at first with diuretics but they stopped being effective after some months.

Soon I was going to the hospital once a week to have the fluid drained off.  That’s when I found out the NAFLD had caused liver cirrhosis.

I started trying to keep to a healthy diet, something I hadn’t even thought about before my diagnosis, I cured myself of type II diabetes by doing so and could even stop taking the medication for this.

In July 2017 I spent my sixtieth birthday being assessed for transplant, and they agreed to put me on the list. But just two months later my blood tests came back to say that high levels of potassium in my blood meant that my kidneys were failing.

Suddenly I was nearly too ill for a transplant.  I was an hour away from being delisted due to my failing condition when a liver became available and I had the transplant that saved my life.  I was in hospital for another three months in recovery.

People just don’t realise how illness in the family affects everyone.  One of my daughters took six months off work to care for me, and the other had three months off – and they had no support.

I went to my first Patient Support Group for liver patients early in 2018, a few months after I had my liver transplant.  If I’m honest I didn’t want to go and meet new people.  But my daughters insisted as they thought it might help.  They were right, and it turned out much better than I had been thinking.

Now I wish I had known about the support groups before I had my transplant.  Mainly for my daughters who both took turns to look after me when I was ill.  My wife died unexpectedly a month before my transplant, and it was a huge shock to us all, so while we were all still grieving, I got the call that a liver was available for me and we had to deal with that too.

People just don’t realise how illness in the family affects everyone.  One of my daughters took six months off work to care for me, and the other had three months off – and they had no support.  I did feel like I was a burden to them, so I knew I had to do something to help myself, but it was going to be hard.  At this point I was so ill I couldn’t walk to the kitchen without being out of breath, so driving wasn’t an option.  But my daughters thought I should go to the support group, so they offered to drive me.

The first support group I went to was the one British Liver Trust runs at the Royal Infirmary in Edinburgh which is for all liver transplant patients.  It’s about an hour from where I live. There I met Janette – another liver transplant patient – who told me that British Liver Trust were helping her set up a group in Paisley, which is closer to home, so I thought I would go to that one too.

The thing I’ve learnt about the groups is that it’s all about keeping a positive mental attitude. When I first started going I would say I was anti-social.  I told Janette – don’t try and make me do any events or anything!  But there was lots to learn from everyone else, and there are some people that, when they talk, you listen, because they’ve been through so much.  Some people are hit with problem after problem after problem, and they still keep going.  And you think, well if they can keep going then I can keep going.  And then you tell them your own story and what you’ve faced, and you know that someone else is finding it useful to hear.   When things are tough someone will say – ‘Go on Gordon, tell us one of your stories!’ It’s nice to get everyone laughing.

Amy, who is the Support Group Manager for British Liver Trust, helps us run the groups ourselves as much as we can.  She gets the room, and the nurses and the speakers – and the sandwiches!  Whatever it takes to get people to come, and then she makes sure that everyone in the room is heard.  Sometimes people are trying to have four conversations at once, so you need someone like Amy who is strong and patient and focussed to run the groups.

These days I try and attend the new groups British Liver Trust sets up – like the one in Livingstone – to support Amy as she gets the group up and running.  If Amy can’t be there I, and others, can stand in for her in some ways – which makes sure the groups keep running and shows other patients what can be achieved.

People think I am younger than I am, so I show them the photo of me before I was diagnosed – and they can’t believe the change.  Since joining the support groups I’ve kept up a healthier diet, and I joined a ramblers group.  We have amazing forests and lochs in the area we live, so it’s all about getting out and walking, which anyone can do.

On one of my first walks we stopped for lunch near the top of a hill. Someone said: “Look back at the wonderful views and see how far we’ve come!” “I don’t look back” I replied, “there be monster, like on the undiscovered territory on old maps”.  “But you’ll miss the wonderful views!” they said.  “I’ll see them on the way down!” I replied.

I walk ten miles a day these days, and can now look back.

My life nowadays is so different to when I was working and spent all that time driving about in my car and eating rubbish food.

It’s great to hear that British Liver Trust have got a grant from the National Lottery and other funders, to get two new support group people to work with Amy, so more groups can run in Glasgow and Ayrshire and they can set up new groups in Grampian and the Highlands. People like me really need support closer to home after they are discharged from hospital.

It motivates us all to give more back. I know Janette and some of the other liver transplant patients, including John from the Falkirk group, have signed up to be peer-to-peer volunteers at the Liver Unit in Edinburgh, meeting and talking to patients who are waiting for a transplant or have just had a transplant.

I’d like to do the same, but at my local hospitals in Monklands and East Kilbride.  There are lots of people going to appointments there who are not ill enough to be seen at the Liver Transplant Unit in Edinburgh, and it would be great to tell them about the British Liver Trust. Let them know there’s support out there for them and their families. Perhaps that way they will be able to avoid a liver transplant altogether. 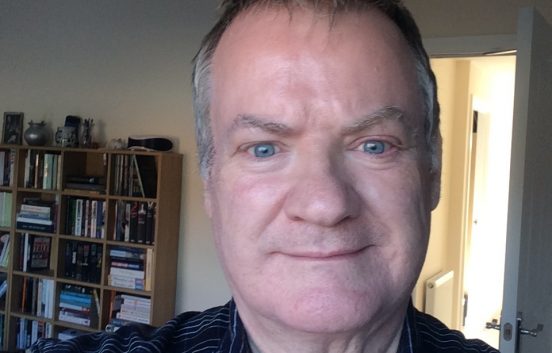