Eloise's story: "I gave up and took myself off the transplant list." - British Liver Trust

Eloise’s story: “I gave up and took myself off the transplant list.”

In early 2020, 24-year-old Eloise removed herself from the liver transplant list voluntarily, having given up hope of finding a donor. After meeting a group of other young people who'd been in a similar situation, she put herself back on the list and received the life-saving gift of a new liver in February 2020.

"I was 24 years old when I was told I had cryptogenic end stage liver failure in October 2019. I’ve had elevated liver blood levels since I was 16 but after biopsies and procedures I was only diagnosed with a fatty liver. I didn’t receive any medical treatment at first, just advice on lifestyle changes which I followed.

"By early 2018 I was becoming more and more lethargic and experiencing horrendous burning pain in my legs. One day I couldn’t walk. I was admitted to Royal Berkshire Hospital where I underwent even more procedures and was diagnosed with peripheral neuropathy from malabsorption of vitamins and hypertension. The day before my 23rd birthday I was discharged and I re-learnt to walk again after intense neuro-physiotherapy and hydrotherapy.

"For a year and a half I improved dramatically to the point where I was put on a yearly check up.

"In October 2019, I returned from living abroad for three months to attend my grandfather's funeral. But immediately as I stepped off the plane my whole body started to swell and I went beyond yellow. Once again, I was admitted to Royal Berkshire Hospital where I was full of infection from toxins that had been building up in my body. My stomach swelled and I had to have an ascitic tap.

"After 10 days in Royal Berks, a bed became available at Queen Elizabeth Hospital in Birmingham. Within 24 hours of being there, I was told I had end stage liver failure and my only option was a liver transplant.

"To undergo a transplant you have to be well enough to accept a liver but ill enough to need one. I was accepted onto the list on October 21st but two days later I was taken off the list as I was in intensive care due to sepsis. I was put back on the list after treatment for this and I could finally go back home.

"However I kept filling up again with ascetic fluid so I was a day patient at RBH for ‘drains’ on a fortnightly basis. My biggest drain was 12 litres of fluid (10-12 litres and would lose almost a stone every time).

"A week after I was discharged from Birmingham I had my first ‘call’. So a three hour journey up to Birmingham in the middle of the night and I was prepped for surgery. I was ready to go down to theatre but the surgeon then came and informed me that the liver was not suitable for me as it was too big.

"At the beginning of January 2020, I got my second call for a liver and at this point, I was almost on the critical list as my liver was a ticking time bomb. However this time, there were no beds available at the hospital so the transplant couldn’t happen. I was gutted.

"I accepted my fate. I was going to die"

"I gave up and took myself off the transplant list. I accepted my fate. I was going to die but that was okay with me.

"I then met the most amazing group of young people who have had a liver transplant through a liver support group at QE. Meeting them changed everything. I could see how much life was ahead of me. Everyone in that room was so happy and full of life... I knew I could do it. So I reactivated myself on the list.

"I received my third call two days later. However, when the surgeons saw the liver, it was deemed too fatty for me so the transplant was called off.

"Fast forward to 15th February at 6.40am. My phone rings.... Hello, am I speaking to Eloise?’ My heart dropped. I knew this was the one, I could just feel it!

"After 10 hours of waiting, the co-ordinator came in and told me that I will be going down to surgery at 8pm. My emotions and thoughts???? OH MY GOODNESS!!!!

"I said my goodbyes and I was whisked down to surgery. When I came around I couldn’t believe it. (8.5 hours in surgery) I honestly remember every moment of waking up. I was pointing at my nose and my throat to get the ITU nurse to take my tubes off because I was ready. I had no pain, I felt like a million dollars!

"I can’t even begin to describe the difference in my life. I can finally be a young lady and I made it to my 25th birthday with many more years to come! Despite coronavirus, I have had the most amazing and incredible six months.

"Everything I do, I do for her"

"To all of my family, friends and everyone in the world, please may you take time to discuss organ donation. One person can save up to nine lives.

"I understand the loss and the bittersweet pain of organ donation. I lost my dad to cancer when I was 15. I understand the pain, hurt and depression of losing the one of the most important people in your life.

"But to my donor and her family. I wish I could tell them how much she means to me and how much I think about her and her family.  She was in her 70’s so I can’t even imagine how fabulous she must have been! Such a bittersweet situation. But I understand death and I hope my donor’s family can find comfort in the way of me being able to live. Everything I do, I do for her. I am forever grateful.

"Like I said, this is a message close to home. We are all humans and we all miss someone who has a heavenly birthday, young or old.

"Let's all have the conversation with our loved ones about donation. The law changed back in May due to an amazing campaign called Max and Kiera’s law which is another inspiring story.

"If you don’t feel comfortable with organ donation, no one judges you at all! Please just make sure your wishes are known on the NHS organ donation register!" 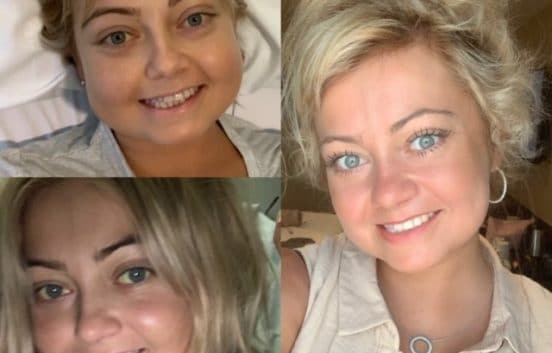