My message for all those waiting for a liver is to never  give up! You never know who will step up and say yes.

Since childhood I’ve enjoyed running. It seems as though I’ve always gravitated toward other runners. It was no surprise to me that one of my best friends, Xochilt Alavarez, enjoyed running as much as I. Abut two years ago, she began to complain about a side ache. Within six months, the mildly irritating cramps became a diagnosis of liver cirrhosis, and my friend was in need of a transplant. When none of her friends or family matched, her sister asked that I write a general request for help on social media.

As a writer, I thought to myself that I had not even offered to step up and attempt to donate. I don't even know my blood type, but I told Xochilt that, if I had the dsame blood type, I’d step up and donate. We were a match. Everything seemed to be going as planned. I went through all of the scans for my liver, heart, etc and finally the surgery date was set: April 11, 2018. Then, something unimaginable happened: at our last appointment, just a few days before the surgery, my friend was told that her liver began to function and that she no longer needed surgery. That was it. I didn’t need to come back again. I had done my part.

As I walked to my car, I felt incomplete, I was happy for my friend, but I still wanted to give….so I went back to the coordinator and told her to place me on an anonymous donor list (I really wasn’t sure one even existed. I just wanted to donate.

They wanted to know if I was still interested in donating. I was told that I might never get to meet the recipient….it didn’t matter

It took several months, but in September USC Keck Hospital called me and told me that they had a match: a 29 year old woman. They wanted to know if I was still interested in donating. I was told that I might never get to meet the recipient….it didn’t matter. Just the thought of being able to help another human being who must’ve been going through so much physical and emotional pain was enough for me to say yes. We set the date for December 12, 2018.

As time went on, I was asked if given the opportunity, would I like to meet the recipient. I said yes, and on March 5, 2019, I finally got to meet my recipient! It was an amazing moment. I was so overjoyed to see her doing well. I think our meeting was definitely a turning point for me. After the surgery I resumed walking on a daily basis.

I was able to walk at least 1- 2 miles per day after just a couple of weeks. I resumed running after about 8 weeks. On March 17, I completed a 9 mile run in Portland, Oregon. By April 29, I was in Blackpool where I was able to complete the Blackpool Marathon. I am now training to run a 100 mile run in November. I want to raise awareness of the need for living liver donors, and that even after donating an organ, you can return to your former activities.

My message for all those waiting for a liver is to never give up! You never know who will step up and say yes. This time last year, I could have never predicted that I would have helped a stranger with a new opportunity to live. For those who are contemplating donating a liver, I say don’t be afraid! There’s no greater gift to give to another than the gift of life. If I could donate over again, I’d do it in a heartbeat.

The memory of donating an organ is a source of great personal satisfaction. Fortunately, I feel as though I’m back to where I was before the surgery, in fact, if it weren’t for the beautiful scar, I’d wonder if the transplant ever happened.

It saddens me that so few people know about live liver donations. Let’s continue to be hopeful and together, spread the message. 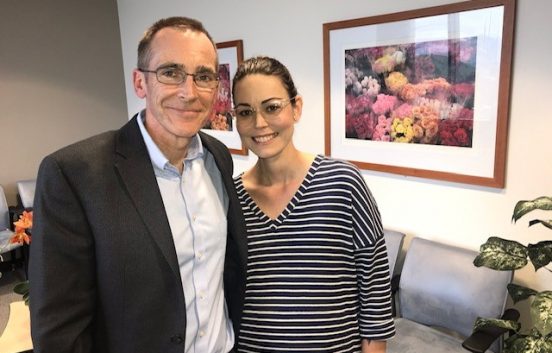