I wish I had known and asked more questions when I first found out.  I haven’t found a support group yet and only those close to me know as there seems to be a stigma around liver troubles when discussed with the ordinary public.  People automatically assume you have alcohol issues.

I was told at Princess of Wales Hospital in Bridgend that I had Cirrhosis after waking up from anaesthetic from a failed attempt at removing my Gall Bladder. I was shocked and confused and very worried because I did not know what this meant. I was told I would be referred to the University Hospital of Wales in Cardiff for a further attempt at removing my Gall Bladder because it was too risky to complete at Bridgend due to potential blood loss. If my liver was damaged during surgery it could result in significant blood loss and I was in better hands in Cardiff where there was more specialist equipment.

I came home from hospital not knowing anything and the more I read, the more I became frightened. The staff at the hospital were so nice but it wasn’t really explained. I had to visit my GP to discuss it. My GP was even nicer and it was made to sound like it was a serious issue, I began to think I must be very lucky that it was discovered by accident this way as the symptoms I had been experiencing were put down to other problems, the pain was put down to my Gall Bladder problem and the lethargy was put down to my thyroid and depression problems. I have also experienced a reduction in my immunity and seem to have had a lot of antibiotics for various things since diagnosis. It was only on viewing my liver during surgery that it was discovered.

I had never heard of this, I did not know that there was a condition that could do this that was not related to alcohol or Hepatitis.

It will be two years in March 2019 since the discovery. I have 6 monthly scans to check for signs of changes which could indicate a cancer and regular appointments with my Liver Specialist. Still haven’t had the Gall Bladder removed yet which is a big worry as I know they expect me to be ill afterwards and have booked a High Dependency bed for me. I have had numerous blood tests to determine the cause but nothing has been found so it has been put down to me being overweight and it is possible that some of the medications I have had to take in the past may not have helped. I had never heard of this, I did not know that there was a condition that could do this that was not related to alcohol or Hepatitis.

The only thing I can do to slow the damage down is to lose weight which is a major struggle.   Day to day living hasn’t really been affected apart from the continuous struggle to lose weight.  I do think about how fast things may deterioriate on my bad days but I know I am very lucky that this was found before any cancers or liver failure had made me ill.  My children don’t really understand but my Mother panics.  I try and look after myself anyway because my children need me.

I wish I had known and asked more questions when I first found out.  I haven’t found a support group yet and only those close to me know as there seems to be a stigma around liver troubles when discussed with the ordinary public.  People automatically assume you have alcohol issues.

I would urge people to look after themselves more, it’s not only heart disease that results from carrying extra weight.  I know that awareness is increasing but there definitely needs to be more public education around the topic.  I keep myself informed now and I urge others to do the same 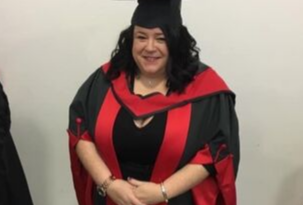