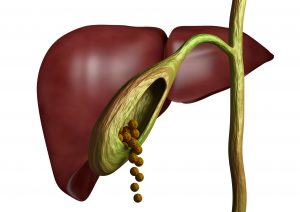 Gallstones in gallbladder and bile duct

What is the gallbladder? 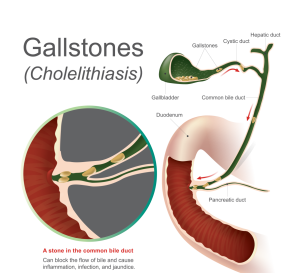 The gallbladder is a small, pear-shaped pouch about three to six inches long. It is tucked just under the liver, below the right rib cage and is connected to the intestine and liver by small tubes called bile ducts.  Bile ducts carry bile, a yellow-green fluid produced by your liver. Bile contains water, cholesterol, phospholipids and chemicals to aid digestion (bile acids), as well as waste products for excretion via the bowel, such as bilirubin.

Bile is collected and stored in the gallbladder, and released along the bile ducts into the intestine when we eat food. It plays a central role in helping the body digest fat. Bile acts as a detergent, breaking up the fat from food in your gut into very small droplets, so that it can be absorbed. It also makes it possible for your body to take up the fat-soluble vitamins A, D, E and K from the food passing through your gut.

What are the symptoms of gallstones?

Many people live with gallstones without symptoms and are unaware they have them until the stones show up in tests performed for another reason.

The most common symptom of gallstones is pain in the abdomen, known as biliary colic. This is a pain that usually lasts between one

What are the most common symptoms of gallstones?

The most common symptom of gallstones is pain in the abdomen, known as biliary colic. This is a pain that usually lasts between one and five hours (but sometimes up to eight) which can vary from mild indigestion or discomfort, to severe pain. You may feel it:1

Other symptoms may include nausea, vomiting or excessive sweating.

Can gallstones be mistaken for something else?

Sometimes gallstones may be mistaken for a heart attack or a peptic ulcer. This pain is due to strong contractions as the gallbladder tries to expel a stone. The pain usually begins after eating fatty foods, though it can also wake you up during the night. These attacks are usually infrequent and some people find walking about can relieve the pain.

Symptoms of gallstones that indicate a problem

Symptoms which indicate a complication has arisen (complicated gallstone disease) include:1

How are gallstones diagnosed?

Asymptomatic gallstones are often found by chance during investigations of unrelated conditions.

If you have symptoms and gallstones are suspected, your GP will ask you about the symptoms you are experiencing and may feel your abdomen to see if your liver or gallbladder is tender or enlarged. Blood tests are usually the next tests that your GP will carry out.

A sample of blood is taken by your doctor or a nurse and sent for analysis. These blood tests will look for signs of infection or inflammation. Additional blood tests known as liver function tests (LFTs) will also be done and will look for indications of inflammation, blockage of the bile ducts and damage to the liver.

The liver produces many chemicals that pass into the bloodstream; these can alter if your liver is inflamed or if bile ducts, carrying bile from the liver, are blocked. In the case of suspected gallstones, high levels of alkaline phosphatase (ALP), gamma-glutamyl transferase (GGT) and serum bilirubin will usually be seen.

If you are found to have an abnormal result, or a strong clinical history (a family history of gallstones, previous gallbladder surgery or you have risk factors for gallstones), then your GP will refer you for further tests, such as an ultrasound scan, to confirm your diagnosis.

If gallstones have been discovered incidentally and are not troublesome, it is often recommended to leave them alone. In this case, your doctor may want to adopt a ‘watchful waiting’ policy, which means your symptoms will be monitored to see if they progress before treatment is considered.

Some people may have one mild attack of biliary colic and no further trouble, while others have continuing problems. You may be prescribed painkillers, which you can use to control the symptoms if you experience an attack.

Be aware of worsening symptoms
Waiting to see if further symptoms develop is quite common and safe but you should look out for any deterioration in your condition and report any symptoms to your GP. If your symptoms persist, your doctor will recommend that you are referred for treatment.