The British Liver Trust, is supporting  International Non-Alcohol related Steatohepatitis (NASH) Day today. We are working in partnership with the Global Liver Institute in the fight against NASH. Over 50 organizations worldwide are coming together today to raise awareness for NASH and promote early intervention, which affects more than 115 million people worldwide.

To mark International NASH day, a new report titled ‘Creating a policy narrative around NASH in Europe and the Middle East’ has been launched proposing recommendations for action for policy makers across Europe. NASH is the progressive form of non-alcohol related fatty liver disease (NAFLD) and approximately 20% of NAFLD patients develop NASH.[1] NASH is where fat globules accumulate in liver cells, leading to cell death and the development of inflammation. With years of chronic inflammation, scar tissue begins to form and cause liver fibrosis and when fibrosis is severe, it becomes cirrhosis, which can result in liver failure and liver cancer. The only cure for NASH cirrhosis at this time is a liver transplant.

“NASH is a silent epidemic that affects millions worldwide and we must address on a global scale.  We are pleased to be joining together with many other groups around the world to help raise awareness and to address this silent epidemic,” says Pamela Healy OBE, Chief Executive, British Liver Trust.

“Our aspiration is that NAFLD and NASH be included in healthcare conversations whenever obesity and diabetes are mentioned so early intervention is addressed.”

NASH is known as the “hidden epidemic,” since its symptoms are not overt and it currently requires invasive biopsy for diagnostic confirmation. NASH is expected to become the #1 cause of liver transplant by 2020 in the United States, and its prevalence is projected to increase globally in association with obesity and type 2 diabetes. NASH is poorly-known, under-diagnosed, and as such represents a growing global public health issue in most countries worldwide. NAFLD prevalence is estimated to be highest in the Middle East (32%) and South America (31%), followed by Asia (27%), the United States (24%), Europe (23%) and Africa (14%).[2] 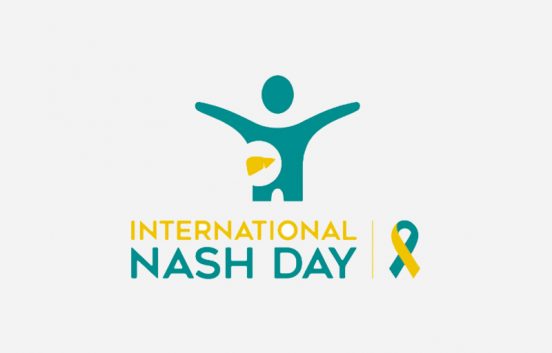