The British Liver Trust is calling for an urgent review of the shielding guidance for liver patients who are classified as ‘extremely clinically vulnerable’.   It is vital that there is clear information about who should be shielding and what the advice is for those on the list.

Shielding measures were put in place to ensure that those who are at the highest risk of complications from COVID-19 minimise their risk of catching it.  The trust understands the sacrifice people are making to shield and the British Liver Trust nurses on the helpline are hearing every day about the huge impact that shielding has had on people’s lives.  Many people are feeling very isolated, are unable to work and have no idea how long they will need to do it for.

The recent announcement that people shielding can now spend time outdoors has no doubt been welcomed by those who have had to stay indoors for 12 weeks.  However, naturally it is very worrying for those who aren’t clear on the scientific reasoning for this ease in lockdown.

Important
If you’ve received an e-mail or text advising you to stop shielding, please seek further advice if this is the first you’ve heard on the matter. We consulted the Department of Health and Social Care who confirmed that these messages should only have been sent to people who have already spoken to their clinician or GP.

There has also been no consistent messaging from England, Scotland, Wales and Northern Ireland.

Vanessa Hebditch, Director of Policy at the British Liver Trust said, “At the start of the pandemic, the government had to make quick decisions with little scientific data available about COVID-19.  Now, with new studies and data about the disease, it is important that the information is reviewed, and patients are informed on the reasons behind the shielding guidance is shared in a clear and transparent way.

“In the meantime, no-one should stop shielding unless advised to by a consultant who are now in control of who is added and removed from the list.”

As part of the British Liver Trust’s campaign for more clarity, the trust has appeared on TV and radio as well as coverage in numerous national and regional media, including The British Medical Journal, The Guardian and Daily Mail.

We also joined with fifty other charities to write an open letter to the Government calling for the urgent need to publish clear, consistent advice on shielding measures to ensure such people protect themselves and can access support as lockdown eases.

It is hoped that in the coming weeks the government will develop a more consistent and joined-up approach to support the most vulnerable patients in the UK.

Initial discussions have suggested that there will be a move towards a more individualised approach with shared decision making and tailored advice for each patient.  While in theory this seems like a positive step forward, it will need to adequately resourced and clinicians will also need clear guidance.

The trust will seek to source formal guidance from the government, in consultation with leading liver consultants, to share with our supporters in the coming weeks. 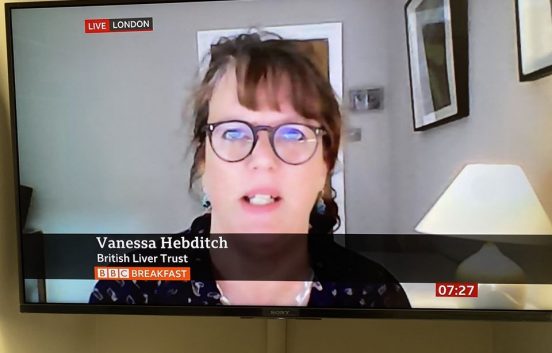 © British Liver Trust. All rights reserved. Registered Office 6 Dean Park Crescent, Bournemouth BH1 1HL
Registered Charity England and Wales 298858, Scotland SC042140. Company Limited by Guarantee Registered in England and Wales, Company No 2227706
Website design and build by Epix Media.
This site uses cookies to give you the best possible online experience. By continuing to browse this site you are agreeing to our use of cookies. See our cookie policy. for more information.