The NHS in England has missed its target to diagnose and treat 85% of cancer patients within two months of urgent referral for almost six years running, according to a new analysis.

Cancer Research UK used NHS data to calculate that almost 55,000 cancer patients should have been diagnosed more quickly or started their treatment sooner over that time frame.

The NHS target sets out how at least 85% of patients should start a first treatment for cancer within two months (62 days) of an urgent GP referral when cancer has been suspected.

Cancer Research UK said this target is being missed, and the figures are getting worse, while other cancer patients, such as those who are diagnosed following a routine referral for something else, are often waiting even longer for diagnosis and treatment.

Data shows the target has not been met since 2015, and the situation has been deteriorating year-on-year since 2017, Cancer Research UK said.

In 2016, around 4,000 additional patients needed to be diagnosed and start treatment to hit the target, but in July this year this figure was already around 11,600.

Michelle Mitchell, Cancer Research UK’s chief executive, said: “These figures are a stark reminder that cancer services have been struggling for years, with thousands of cancer patients having to wait longer than two months to get diagnosed and start treatment.

“While NHS staff have been doing their utmost, the impact of Covid-19 and years of workforce shortages and insufficient infrastructure have meant that cancer targets continue to be missed.

“Cancer won’t wait and the time for the Government to fix these chronic issues is now.

“The Chancellor must use this comprehensive spending review to provide multi-year investment for the NHS to train more staff, and buy more diagnostic equipment, if the NHS is to meet its waiting time targets and put the UK on the path towards world-leading cancer survival.”

Professor Charles Swanton, Cancer Research UK’s chief clinician, said: “Being referred urgently because you might have cancer, receiving a diagnosis and beginning treatment for the disease are hugely anxious times for patients, which are further compounded when there are delays.

“For people with cancer, every day counts; that is why we have cancer targets.

“I’ve been working in the NHS for a long time and it’s hard to watch the continuous deterioration, and the anxiety and worsening outcomes this can cause patients.

“The Government has to commit to long-term investment in workforce and kit so that we can turn things around and give patients both the care and outcomes they deserve.”

Cancer Research UK said delays were being caused by several factors, including too few staff and a shortage of equipment to diagnose people.

It said investment has not kept pace with demand, adding that cancer survival in England already ranks poorly with other comparable countries.

It comes after Professor Martin Marshall, chair of the Royal College of GPs, told MPs on the Health and Social Care Committee on Wednesday that GPs were getting to a place where they referred more patients with suspected cancer.

He said: “When I started as a general practitioner, in many ways we saw part of our job as keeping patients out of specialist services, and many of the patients that we see could have cancer, (but) most of them don’t.

“We’re trained to pick up the red flags, the important symptoms and refer those on but not refer everybody who’s got cancer (symptoms) because the NHS would collapse if that’s what we did… and that in many ways I think is still the mindset of many clinicians.

“So, do we have to shift that mindset to the point where our threshold for referral is lower? I think yes we do.

“Should everybody who potentially has symptoms of cancer be able to refer themselves for a scan or into an oncology team?

“I think the NHS would collapse overnight if that were allowed. So I think our ability as primary care clinicians to filter and make judgments is an important part of the sustainability.

“It’s why we have in the NHS still pretty good outcomes for a very low spend, in comparison with other countries.” 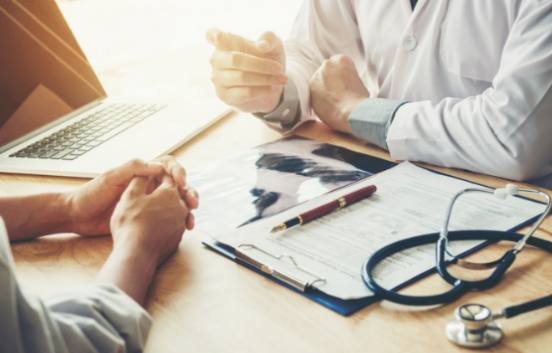