Phil’s story: “I wouldn’t have got through it without the British Liver Trust”

Phil was diagnosed with liver cancer in 2020. Here he tells us about his rollercoaster journey and how he has been using the British Liver Trust's nurse-led helpline for information and support.

We decided that neither Covid nor cancer was going to stop us from getting married.

It was earlier this year, just before Covid.  I was getting into bed when excruciating pain went right through me.  It lasted about two minutes, and it was so bad I couldn’t talk.  My fiancée Jannette thought I was having a heart attack – she knew I’d had a heart by-pass almost 30 years ago.  I knew it wasn’t a heart attack, but I was really concerned, so I went to see my GP.

The doctor thought it might be gallstones and referred me for an ultrasound.  Instead they found lesions on my liver. Liver cancer. To say it came as a blow was an understatement.

Since then I have been on a real rollercoaster.  At first the surgeon thought it was operable. I could have a liver transplant.  I bought new pyjamas and dressing gown in preparation. But then they looked at my heart.  Would my heart stand the operation? I was managing 30 minutes a day on my exercise bike and cycling 70 miles a week. I felt confident!  I was referred for a second opinion. It wasn’t good news.

I’m a really positive person but this really takes it out of you.

"They don’t have to care, but they do"

When I was first diagnosed, I looked online to find out about liver cancer and that’s when I discovered the British Liver Trust.  I called the helpline to speak to the liver nurses.  I like talking to them, it does me good.  They don’t have to care, but they do – it’s like a way of life for them.  They give me encouragement and strength.   It’s unbelievable strength they give me. I know that I’ve got some very concerned people looking out for me.  I know that I can call them at any time and talk to them about anything – the journey I am on, the next steps.  They are five-star angels.

When I call I know it’ll either be Kirsty, Becs or Gill who answers – but they all know what I am going through.  I don’t have to phone up and start from the beginning.  So for example, I had an appointment with my consultant this week, and I wrote up a list of questions I wanted to ask.  I phoned the helpline before I went, and Kirsty and I talked through them.

After my appointment I called back with my news; that I might be selected for a trial and if not then I’ll be going for chemotherapy.  The British Liver Trust nurses are already reading up on the medical trial to see what it might involve.  And they allayed my fears about chemo.

Seven months has gone so quickly.  It’s what goes through your mind that you need help with. I don’t feel ill.  I don’t have a broken arm or a black eye.  But I know that sooner or later it’s going to grab me.

"You can’t put a price on the care they give"

At the start of this year Jannette and I had been looking forward to our wedding in Zante in July.  Well Covid put a stop to that, and it was rearranged for September.  Then it was cancelled again and we were devastated. In the end we decided that neither Covid nor cancer was going to stop us from getting married, and we tied the knot in October with our close friends to witness.

I say to people, I wouldn’t have got through it without the British Liver Trust.  Jannette agrees. You can’t put a price on the care they give. I can’t praise them enough. 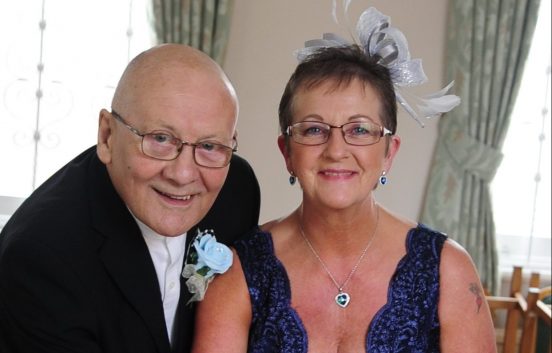