Fi' story: "As of May my liver has grown by around a third and is currently on track" - British Liver Trust

Fi’ story: “As of May my liver has grown by around a third and is currently on track”

I will always have to live with the 'worry' it may come back but for now somehow I will try and enjoy life.

Fiona was diagnosed with liver cancer when she was 45.

“My husband Jonathan and I went to visit my sister and her husband at the beginning of December 2019. While we were staying with them my sister noticed my skin was yellow which is a sign of jaundice. I was off my food as well. We enjoyed the weekend as best we could but I was obviously concerned as I had to wait till I got a doctor’s appointment the following week.

“When we returned home I rang the doctors straight away and I was seen by a lovely nurse - this day will never leave my mind. The nurse took a look into my eyes and said there were white dots in my eyes. Straight away she knew my liver was not functioning as it should be. With that she took some bloods and sent them off as an urgent case.

“The following morning I missed three calls from my doctor as I was driving to work. I knew then there something to worry about. I called them back and she confirmed my liver was not functioning and was very worried.

“At this point I burst into tears and went to see my lovely boss Iona. I could not even get my words out. Iona calmed me down and I tried the best I could to carry on with my work. Over the next three weeks the doctor sent me for an ultrasound, CT scan and finally a PET scan.

“I was very poorly with my jaundice levels and my skin went more and more yellow. My liver enzymes were sky high, from memory 1,200. I was admitted to Guildford Hospital to have loads of fluid pumped in me to try and flush my jaundice levels through. I was not eating either.

“Later, my brother came with me to see my consultant, who showed us the scans which revealed the cancerous tumour on my liver. I could not believe what I was seeing. I am so grateful my brother was there to take it all in as well.

“There was talk of chemotherapy before removing the tumour. I felt sick with fear and feared the worst. My consultant said that liver cancer in women is very rare and they were baffled as to the cause.

“However, after the PET scan revealed the cancer cells were in the tumour on my liver and nowhere else in the body (thankfully), he changed his mind and I received a phone call in early January 2020 from a lovely nurse to say I had to have my bloods done that afternoon as they wanted to remove the tumour the following day.

“After the operation, I remember waking up and being sick from the drugs. I was in hospital for four weeks. I had so many meltdowns, and the staff at the ward were always there are a drop of a hat to hug me when they saw me crying. I can’t thank them enough.

“I had to have help getting out of bed to go to the ladies as I could not do anything on my own and relied on staff 24 hours a day. I had to have two lots of drains which were so painful as they had to drain the fluid on my lungs and on my liver. I also had an infection, however in late January, I actually felt OK and well enough to go home.

“As of May my liver has grown by around a third and is currently on track. It can take a year for it to be fully grown. My medical team now think that the cancer may have been caused by the contraceptive pill, which I’d been taking since I was 17.

“I made sure I had a goal to return to work in March. I was back at work for two days when we were all told to work from home due to Covid-19. I did this for two weeks then went on furlough leave!

“I will be so glad to get back to work as I am craving just a bit of normality. My work, Card Connection in Farnham, have been amazing and their support has been tremendous.

“I would also like to thank Professor Nariman Karanjia, my consultant, and our nurse Helen Griffith, thanks to them I am still here; my amazing husband Jonathan; my brilliant brother and his wife; my sister and her husband - I could not have got through the last six months without them by my side; and all my girlfriends who came to visit me whilst I was in hospital and when I got home.

“I will always have to live with the 'worry' it may come back but for now somehow I will try and enjoy life.” 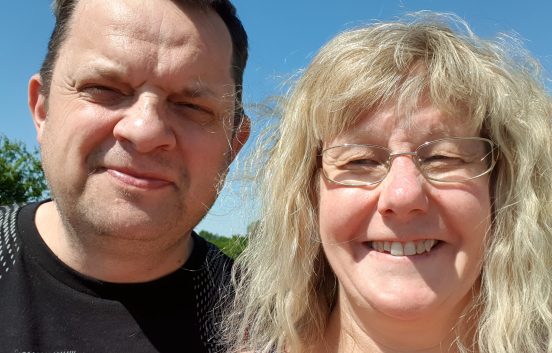