Ed's story: "He had a brilliant sense of humour" - British Liver Trust

Ed’s story: “He had a brilliant sense of humour”

Two months after he was diagnosed with liver cancer, Ed (pictured) passed away in July 2020. His friend, Steve, shares his story.

“I first met Ed at university in 2007. He had a brilliant sense of humour, he was quick witted and was the funniest guy in our group of friends. He was also really into animal welfare - he was vegan and generally led a fit and healthy lifestyle. He was also a massive Manchester United fan.

“Ed was diagnosed with Crohn’s disease in his final year of university and, a while later, with PSC (Primary Sclerosing Cholangitis). Some years after developing PSC, Ed made changes to his diet and adopted a much more active, healthy lifestyle. His blood levels improved so much that he stopped having to take medication.

“In early 2020, Ed started having chest pains. He thought it might have been pneumonia and was admitted to A&E a few times before he was given a scan which revealed he had stage 4 liver and bile duct cancer. That was in May 2020. Sadly, by that point the cancer had spread to his lymph nodes and it was too late for treatment.

"He’d looked into the possibility of going to Germany for specialist treatment but due to the pandemic he’d have had to travel alone which he didn’t want to do. The pandemic made things like hospital trips a bit harder for him. Luckily, I was able to visit Ed a few weeks before he died in July 2020.

“Ed left a three-year-old son, his partner, his parents, sister and many friends. We’re all still struggling with the loss and we miss him a lot. Before he got ill, Ed was trying to arrange a reunion with all his friends from university. We all got together last summer in his memory, and we’re planning to do this every year. We’re also organizing a football tournament, a raffle and a blind auction as a fundraiser for the British Liver Trust. One of the prizes is a Manchester United shirt and football signed by the squad.

“I’ve been blown away by the support we’ve received from friends, family and the businesses who have donated prizes for the raffle. Some of the people who donated have shared their own experiences of liver disease too.” 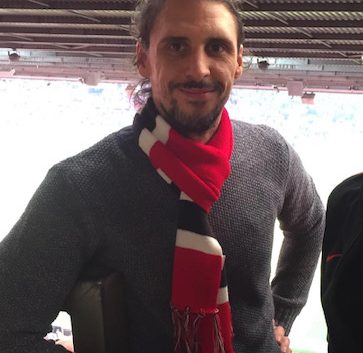