Caroline’s story: “I’ve learnt not to worry about the little things.”

Caroline was diagnosed with liver cancer in 2017. Now she's running the London Marathon 2021. Thank you for sharing your story, Caroline!

I’m running the London Marathon in honour of my donor.

At the time, my doctor said he didn’t think I’d ever need a liver transplant. I was told to come back for annual checkups and to get on with my life as normal, so that’s what I did.

I’d always been fit and active, but several years later I started to become incredibly fatigued. It felt like I was always being pulled down by heavy chains – even the school run would leave me exhausted. Naps didn’t help and I realised I was becoming very ill.

As a result of my change in health, I started having more checks on my liver. In 2017, doctors found a 18mm mass. I’ll always remember the day I was told it was cancerous. I was invited into a room with a ‘do not disturb’ sign on the door, with a team of doctors and nurses. I immediately thought the worst. When they broke the news, it was like a punch in the stomach. My first thought was for my children.

The first stage of my treatment was to tackle the tumour. I had one round of TACE therapy (a procedure where chemotherapy is directed straight into the blood vessel feeding the tumour). It hurt and I was ill for a week afterwards, but it did its job and completely shrank the tumour. I was very lucky.

After that I was added to the liver transplant waiting list. I kept myself fit and well for the operation by exercising every day and drinking lots of water.

Ten months later, I still hadn’t had had ‘the call’. Then, one evening, just as I was admiring our well-stocked freezer and thinking how useful that would be if the call came then, the phone rang. It was the transplant coordinator at Addenbrooke’s and they had a liver for me. When I told my husband, he dissolved into tears.

My family and I all rushed down to the hospital. We played monopoly until 4am when I was finally called into theatre number eight  – my lucky number – for the operation. The transplantation went well and when it was time to leave hospital, the transplant coordinator told me to go out and live my life. Six months later I took part in the British Transplant Games. Having a goal like that really helped me stay positive and gave me something to work towards.

Looking back, my advice to others in a similar situation is to remember that everyone’s journey is different and not to worry too much about the future – that’s your consultant’s job. Of course, that’s easy for me to say now that I’m well. I’ve learnt not to worry about the little things and to appreciate the everyday beauty of life, like the birds singing and the trees changing with the seasons.

I know that my donor was a woman who would have turned 80 in 2021. To express my gratitude for her lifesaving gift, I’m running the London Marathon in her honour. I’ve drafted a letter to her family, which I’ll be sending after my race. Thanks to her, I have a second chance in life. I’ve been able to see my children grow up and graduate from university. My donor and her family are my heroes. 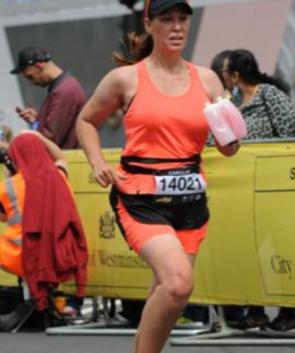