Beryl's story: "My message to anyone who reads this is to listen to your body and if something doesn’t feel right, insist on getting it checked out. “ - British Liver Trust

Beryl’s story: “My message to anyone who reads this is to listen to your body and if something doesn’t feel right, insist on getting it checked out. “

Beryl was diagnosed with Bile duct cancer (cholangiocarcinoma) fourteen years ago.  She shares her story to raise awareness of this poorly understood cancer.  Thank you Beryl!

In 2008, at the age of 60, I began experiencing a ‘pin-prick feeling’ in my stomach and was losing weight without trying.  Alarmingly, I could also feel a small lump in my abdomen.  I visited one of the GPs at my local surgery who suggested that what I was experiencing was normal for my age but did arrange for me to have a blood test, which came back clear.  I now know that it is common with cholangiocarcinoma to have a normal blood result.

As the weeks went on, my stomach pains became excruciating and I couldn’t sleep at night.  This time I saw a different GP who could feel the lump and agreed to send me for scan but warned I would have to wait a long time.

I wasn’t willing to leave it any longer so arranged to have a private ultrasound the next day which confirmed that there was a mass in my abdomen but I needed to have further scans to confirm the location and size of it.  A CT scan followed by an MRI scan confirmed it was a tumour on my liver.

I was then referred to a liver specialist who was completely baffled by my case as there was no cancer in my body at all but results from a Laparoscopy (keyhole surgery) and further tests revealed the devasting news that I had a rare type of liver cancer known as cholangiocarcinoma (bile duct cancer).   No-one at the hospital knew anything about it and one doctor that did know about it said he’d never seen anyone alive with it.

Although I was told the tumour was operable and a date was confirmed for the operation, the lack of knowledge among the medical team coupled with the risks of having an operation filled me with worry so I cancelled the appointment.

I wasn’t provided with any information or support and I wasn’t sure where to turn.  I remember feeling very alone and scared.  This is when I heard a man on the radio from AMMF, a specialist cholangiocarcinoma organisation, which was a huge relief.  Through him, I got the help I needed and realised how fortunate I was to have been diagnosed in time for surgery. It is a very aggressive cancer, and often difficult to diagnose because it typically doesn’t cause any symptoms until it is very advanced.

As well as having more knowledge about cholangiocarcinoma, a new consultant surgeon at the hospital contacted me to discuss the operation.  He explained clearly what they were going to do and reassured me.  The operation was indeed successful and I found out that they had removed 99.9% of the tumour.

I was referred to an oncologist but, in the end, I didn’t need any further treatment.  Knowing this cancer has a high recurrence rate, I spent years worried out of my mind especially when I had my annual scan to check if the tumour had come back.

After ten years of scans, I was told that I was officially cancer-free.  And here I am, fourteen years later, still alive thanks to the fabulous surgeon who convinced me to have the operation and removed the tumour.

I know how lucky am I to survive this cancer and this is why I dedicate my time to raising awareness and funds to ensure that there are more survivors like me.

My message to anyone who reads this is to listen to your body and if something doesn’t feel right, insist on getting it checked out. 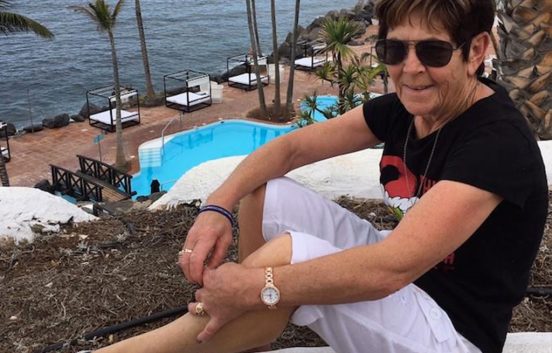