Enough alcohol is sold in Scotland for every adult to exceed recommended weekly guidelines, according to a new report.

10.2 litres of pure alcohol were sold per adult in Scotland, equivalent to 19.6 units per adult per week. This means that enough alcohol was sold last year in Scotland for every adult to exceed the weekly guideline by 40%, every week of the year.

This is according to The Monitoring and Evaluating Scotland's Alcohol Strategy (MESAS) monitoring report 2018, which brings together the latest available data on key alcohol indicators in Scotland.

“Many of us are putting our livers at risk from drinking too much alcohol,” said Judi Rhys, chief executive of the British Liver Trust.  “This shocking report highlights that we are facing a liver disease crisis in Scotland.”

After a period of decline, rates of death entirely caused by alcohol in Scotland have increased over the past four years, and it is now directly responsible for an average of 22 deaths and 697 admissions to hospital per week.

Rates of both alcohol-specific death and alcohol-related admissions are more than eight times higher than in the least deprived areas.

Read further coverage in The National, the Daily Record, STV News and the BBC. 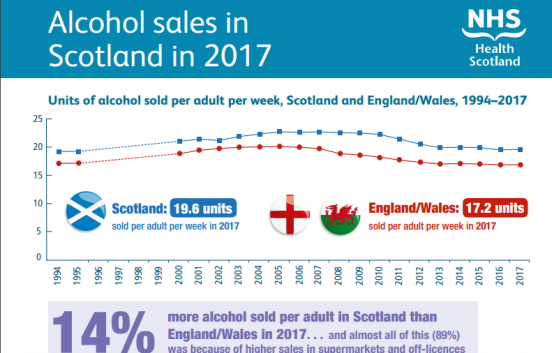